Residents south of Edmonton are concerned about a proposed feedlot near Pigeon Lake.

Despite the long weekend, an information session Saturday night drew a large crowd that was eager to learn the risks of the proposal and what can be done about it.

Martin Klatt, a farmer on the west shore of Pigeon Lake, said the long weekend didn’t deter anyone from coming to hear how the development could harm the lake’s water quality and cause other issues.

“It was quiet, peaceful and clean,” he told CTV News Edmonton. “It was just the way we wanted to live, and that’s going to change big time.

“It already has somewhat, but now when they put in three times the amount of cattle that are there now, I think it’s going to be almost unbearable,” Klatt said.

According to the Pigeon Lake Watershed Association, there would be no way to manage the feedlot properly and negate any environmental impacts. 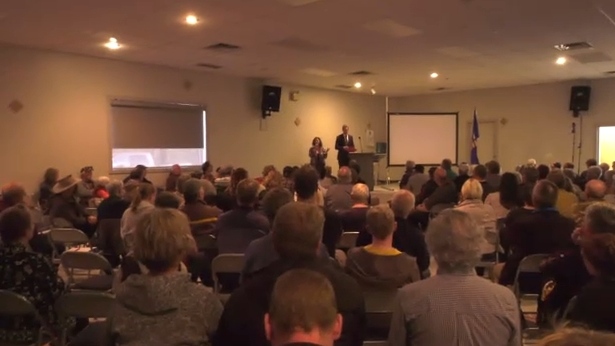 “With harmful algal blooms and degradation of water quality, peoples’ health is impacted,” he added. “We don’t think there’s any beneficial management practices that would really offset that amount of nutrients coming into the lake.”

The feedlot applicant declined to comment to CTV News Edmonton.

The group leading the fight against the feedlot believes the proposal will get the approvals it needs to move forward with the project. Either way, they’re preparing a case to have it stopped.

“In the court of common sense, this should be denied,” said Jeannette Hall, an organizer with Families Impacted by the Pigeon Lake Feedlot.

“But, because I’m aware of the policy framework and the problems in the legislation, it’s most likely, if we were to bet, I’d say it’s going to go through, so that means we’re likely to do an appeal,” Hall added.

No timeline is set for a decision.

The region relies on the lake during the summer season for tourism and recreation, Gibbs said. In his view, the only option is to find another location for the feedlot — far away from the water.

“(If approved), they can’t let their children go out, or their pets go out into the water, and it impacts the long-term plans that people have for their cottages and their daily use of the shore,” Gibbs said.