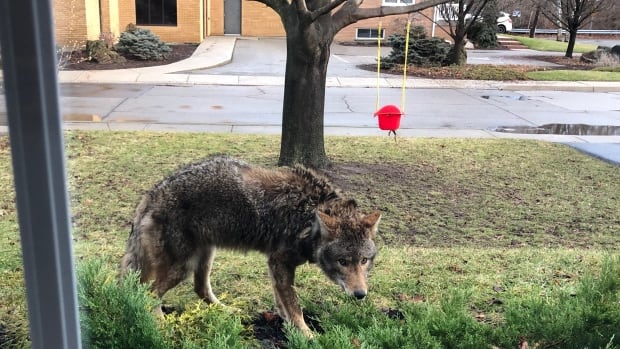 The coyote stands in the Westdale front yard, it’s thick, tawny fur bunched along its hunched back and an inquisitive look on its face as it stares directly through a window at the person taking its picture.

A bright red child’s swing hangs from a tree in the background.

Dan Priljeva was the man behind the camera. He snapped the image of his woodland neighbour around 8:30 a.m. Saturday.

“We were hanging out with the kids and this thing was just staying there, digging around in our little front garden,” he said.

Priljeva says proximity to wildlife is one of the reasons his family loves where they live — just the other night he looked out the same window and saw a pair of skunks cross the road while a deer stood nearby.

“Living at the north end of Westdale is a lot like living in zoo sometimes,” he explained in an email sharing the photo. But a coyote sighting, especially this close up, was something special.

“When I have seen them in the past they always look kind of mangy. That one looked really healthy.”

While Priljeva and his family were excited by the animal’s stop in their yard, the city cautions residents to take care around coyotes.

Priljeva shared his picture on Reddit, where users made comments about the size of the coyote and jokes comparing it to Wile E. Coyote of Looney Tunes fame.

“Don’t leave any ACME mail order catalogues laying around outside,” wrote one.

The family watched the animal mess around in their yard for a bit before running over to a house two doors down where it appeared to be napping and soaking up some winter sunshine for a few hours.

At one point a neighbour started walking down the street, so Priljeva stepped out to warn them.

“I opened the door and told them this wasn’t a dog and they should be careful,” he chuckled.

Priljeva said while he wasn’t overly concerned about the presence of the omnivorous visitor, but noted there are lots of kids under the age of 10 in the neighbourhood who like to play outside, so he called the city and asked what to do.

He said Animal Services staff told him they’d record the location of the animal, but that he should just wait for it to go on its way.

In a city like Hamilton, where residents share the outdoors on trails along the Escarpment with wildlife, residents should be aware of how to act around animals.

A 2018 notice from the city about keeping pets safe from coyotes describes them as “non-confrontational by nature and very curious,” adding they’re generally shy, but have a keen sense of smell, hearing and sight.

The city has been working to raise public awareness about coyotes, according to Brad Potts, supervisor of Animal Services. There have been 21 coyote sightings in 2020 so far, compared to 310 the year before and 403 in 2018.

Some of those sightings included attacks on pets.

“Coyotes are wildlife and therefore are unpredictable,” wrote Potts in an email, adding the city recommends people keep their distance from animals and avoid feeding them. “It’s important that coyotes continue keeping their distance and natural fear of humans. Keep cats indoors where they are safe.”

Here are some other tips from the city to help people stay safe around coyotes: