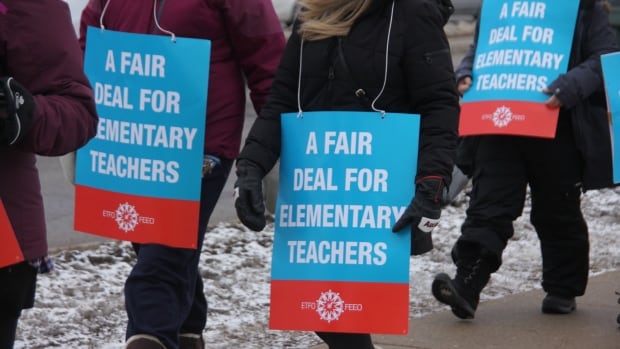 All schools in Waterloo region will be closed Friday as the four teachers’ unions walk off the job.

It’s the first time since 1997 that teachers and support workers from all major unions will strike on the same day.

Education Minister Stephen Lecce called on the unions to accept private mediation, rather than the government imposed mediator, to “end this needless escalation.”

As of Friday there were no other strikes planned in Waterloo region for the week ahead.

All extracurricular activities planned for Friday are cancelled.

The board says all community-use rental permits are also cancelled.

“We understand that job action is frustrating for families, students and staff.  Thank you for your patience and understanding during this time,” the board said on its website.

‘We regret the disruption’

The Waterloo Catholic District School Board says parent-teacher interviews scheduled on Thursday will go ahead as planned.

“We regret the disruption to student learning and inconvenience to families that will result from job action. We respect the right to strike is a legal part of the collective bargaining process,” the board said in a statement.

“It remains our hope and prayer that the parties are able to achieve freely negotiated collective agreements that serve the needs of our students and are fair to teachers/education workers and Catholic ratepayers.”

The cities are all offering strike-day camps, as are several local museums and private businesses. Advance registration is required.

The Upper Grand District School Board, which serves Guelph and Wellington County, said parents are guardians are “strongly encouraged to begin making alternate arrangements for your children prior to this one-day strike.”