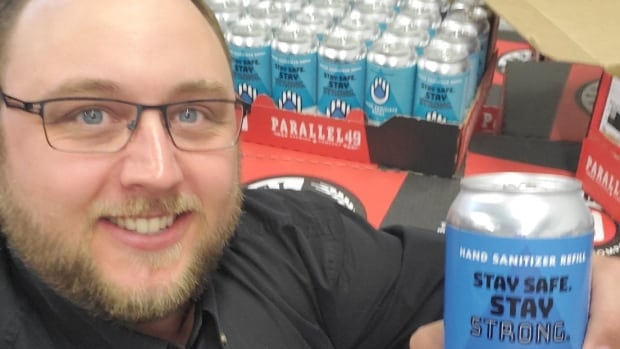 Londoner Adam Brock has been working with a brewery in British Columbia to pump out hand sanitizer and deliver it to charities and front-line workers who need it most.

Brock runs the Food Safety Alliance, which supplies breweries and food production facilities with cleaning products. That business is still going strong, but he’s also been working with BC brewer Parallel 49.

“I’ve been shipping them the raw materials to make the hand sanitizer, they make it, he ships me back the sanitizer and we package it,” Brock said.

He’s already packaged a skid full of 4L jugs of the sanitizer, which went to organizations that help kids with compromised immune systems.

The latest shipment of hand sanitizer came in tall-boy cans, though none of the 2,471 cans had labels on it. They have to be applied by hand.

The 4L jugs are in short supply, so those who get the cans can use them to refill what they already have.

Brock Coutts, founder of Patent 5 Distillery, started making the liquid hand sanitizer this week and has already been overwhelmed with requests but he wants to ensure those who need it most are prioritized. 0:41

The sanitizer has gone to Ronald McDonald House, the food bank, the Unity Project, Parkwood hospital and nurses in different parts of the hospital.

It’s also been delivered to Ornge Air Ambulance staff, to Canada Border Services and to other workers.

“I have a family friend who knows front-line workers in New York City, so we sent four jugs to a hospital in Manhattan,” Brock said.

Breweries are uniquely positioned to make hand sanitizer in vast quantities because of their large vats.

Labatt Breweries announced it would do so, and has so far produced 100,000 bottles of hand sanitizer, which were distributed to food banks, employees and staff in restaurants that are open for takeout.

Labatt has also launched a program to help the hospitality industry, which allows customers to purchase gift cards for local restaurants, bars or pubs. Stella Artois adds an additional $10 to the value of the card, and the establishment immediately gets the money.

Restaurants can sign up to be part of the program at www.rallyforrestaurants.ca.