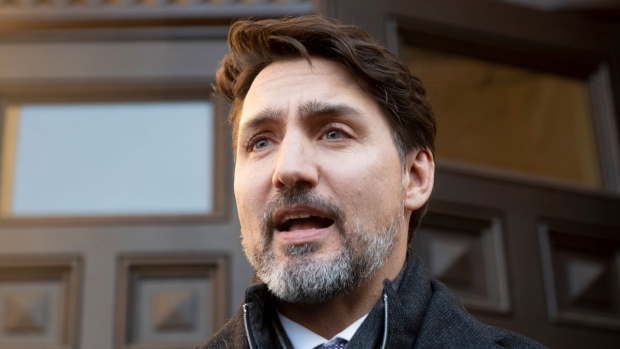 OTTAWA — Prime Minister Justin Trudeau said the government is focusing on a quick, peaceful solution to address ongoing protests and rail blockades that have shut down much of the country’s rail system.

He made the comments after meeting with the Incident Response Group on Monday.

“I understand how worrisome this is for so many Canadians and difficult for many people and families across the country. We’re going to continue to focus on resolving the situation quickly and peacefully and that’s what we’re going to do,” Trudeau said.

The Incident Response Group, which includes senior cabinet ministers, was discussing the escalating dispute over a planned natural gas pipeline that would cross Wet’suwet’en territory in northern B.C.

“We had a good meeting this morning of the incident response group, discussions with Ministers, I made some phone calls to Indigenous leadership as well as to a number of premiers,” Trudeau said.

However, experts say it will be a long road to progress as politicians and police navigate an already strained relationship with Indigenous groups.

“This is clearly recognition from Ottawa that the public wants to see something done. But the question is what exactly can they do at this point,” Laura Stone, political reporter with the Globe and Mail, said during an interview with CTV’s Your Morning Monday.

Protesters across the country have been blocking access to railway lines in support of the Wet’suwet’en Nation, whose hereditary chiefs oppose the controversial Coastal GasLink pipeline project on their ancestral territory.

Over the weekend, Indigenous Services Minister Marc Miller visited the railway blockade in Tyendinaga Mohawk territory, near Belleville, Ont., where he said he made “modest” progress after a day-long meeting with the Mohawk Nation.

“There’s a lot more work to be done, and I have a few messages I need to go back to the prime minister with,” Miller said, adding that he would be discussing with his cabinet “what the next steps are.”

Miller reiterated those steps would not be “easy,” saying “there will be more steps to do to address some underlying issues that have characterized our relationship for longer than I’ve lived.”

Stone, who spent the weekend reporting from the Belleville blockade, noted that police are being careful with how they engage with protesters.

“What’s really interesting about the scene near Belleville is that OPP officers are really trying to engage in a dialogue with these groups but not actually going into a hostile situation,” she said.

“They’ll sit back on the road, they’ll check in with protesters twice a day to make sure everything is alright.”

Conservative Leader Andrew Scheer has criticized the Liberal government’s response, suggesting that the government should order the RCMP to put an end to the blockades.

However, Trudeau has responded to those calls noting Canada, “is not the kind of country where politicians get to tell the police what to do in operational matters.”

Miller has also said that sending police in to break up blockades would only result in more disruptive protests in the future thanks to a tense relationship between police and Indigenous communities.

“Let’s realize our mistakes from the past and make sure they don’t happen again – because this problem is not going away anytime soon, and if we don’t solve it the right way [with] peaceful open dialogue, it’s going to come back again and again and again,” he said.

Support for the Wet’suwet’en Nation has now spread south of the border, with protesters blocking trains in Seattle.

“Canada off Wet’Suwet’en land,” read a sign held by protesters.

Meanwhile, over 200 people have RSVP’d to a protest planned Monday at Ottawa’s Confederation Park, according to a Facebook event page.