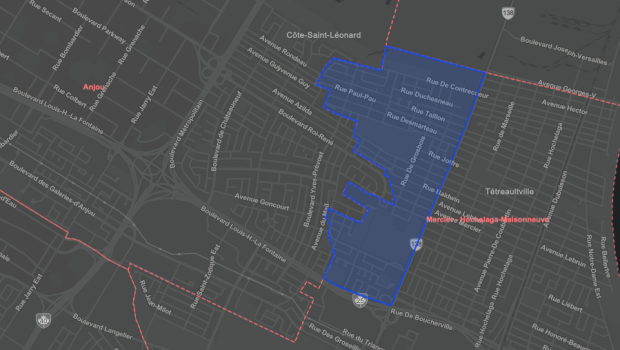 MONTREAL — The City of Montreal announced a boil-water advisory Thursday night in the area of Mercier-Hochelaga-Maisonneuve and a “very limited” section of Anjou.

It didn’t explain why the advisory had been put into effect or the details of the water contamination found. An operator at 311 said there had been a break in a sewage pipe that is now being repaired.

The area in question is bordered by Ave. Georges-V to the east, Sherbrooke to the south and De Boucherville St. to the west. The northern edge of the area is uneven and bordered by many different streets.

According to a map the city provided, the advisory was put in place at 5 p.m. Thursday and was expected to be lifted on Saturday evening, though they asked local residents to wait for further notice.

The city is asking residents of that area to boil tap water for a full minute, or to use bottled water, if they want to use it for drinking or ice cubes, brushing teeth, preparing babies’ bottles or baby food, and washing and preparing food eaten raw or without prolonged cooking, such as canned soup.

If people had already made ice cubes or prepared food using water from after the time of the advisory, they’re asked to throw it away.

Water is considered ready if it’s been brought to a full boil “with large bubbles” and left boiling for a minute.

Unboiled tap water can be used for washing dishes in hot water, washing clothes, baths and showers—though children should be washed with a washcloth. Local businesses are asked to take note and to warn their customers.

People with questions are asked to call 311.