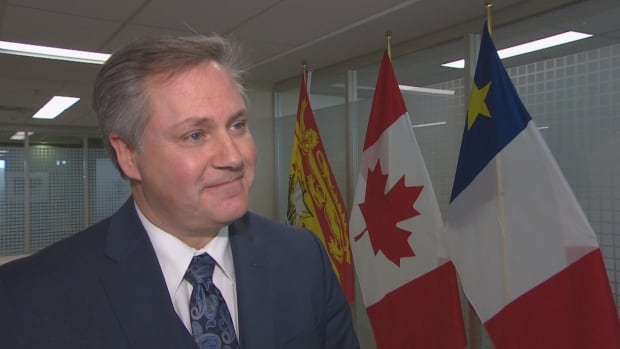 Glen Savoie says it was “shocking” when he learned, as a child, that there was another way to pronounce his last name.

He had learned to pronounce it as “sa-VOY,” the English way. But then he heard his father Louis, who had moved from the Neguac area to Saint John for work, speaking to his own parents back home.

“I remember very clearly,” Savoie said. “My father was talking to his parents on the telephone and he was speaking French, and I had never heard him speak French before, so it was almost shocking to me.”

In those days, Savoie says, “you had to sort of fit in” when you relocated from the francophone north of the province, so Louis Savoie had let the English pronunciation take hold “because it was easier for his children, he felt.”

But young Glen’s curiosity about his Acadian relatives, and his three years in French immersion from Grades Seven to Nine, gave him enough of a hold on the language to become bilingual, even though he acknowledges his French isn’t perfect.

As one of only two French-speaking Progressive Conservative MLAs–the other is Education Minister Dominic Cardy–Savoie now finds himself provincial minister for La Francophonie.

He was shuffled into the job last week after MLA Robert Gauvin, who had been the only francophone member of the PC caucus and cabinet, quit the party to sit as an independent.

Savoie’s duties don’t include all language issues–the Official Languages Act comes under the premier’s responsibilities–but he will represent New Brunswick at the international French-speaking organization and play a role at francophone events in the province.

And that’s where his name comes in.

Last week Premier Blaine Higgs adopted the French pronunciation of Glen Savoie’s name. Is that the right way to say it? The new minister for the Francophonie himself gives us the answer. 2:45

By any other name…

But last week, when Premier Blaine Higgs announced his cabinet shuffle, the premier adopted the French pronunciation, “sa-VWAH”, even while speaking English.

That led to some questions about which version Savoie preferred. The CBC’s policy is to use the pronunciation preferred by the person in question.

Savoie says that’s the English way in English and the French way in French.

“I’m comfortable with whatever people are comfortable saying. … ‘sa-VOY’ or ‘SA-vwah,’ it’s fine. I’ve certainly been called a lot worse. It’s kind of like those cards when you walk into a government office: ‘It’s your choice, c’est ton choix.’ The same would apply here.”

Higgs referred to Savoie last week as a francophone, though the minister himself says he considers himself a typical New Brunswick mix, with Acadian and Indigenous roots on his father’s side and English, Scottish and Irish ancestry on his mother’s.

“I don’t think my situation is unique, but I certainly feel that because of my cultural mixture, I have a good appreciation of what it is to be a New Brunswicker.”