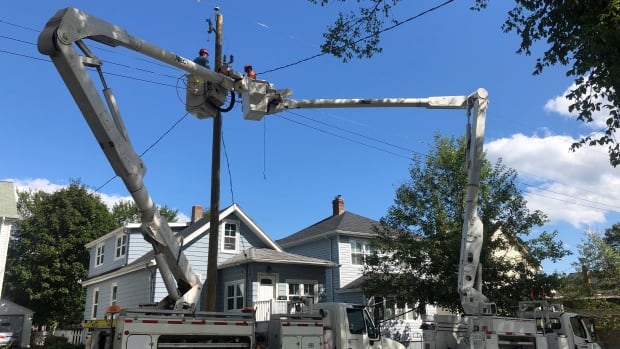 The number of homes and businesses without power continues to dwindle across the Maritimes, three days after the powerful storm Dorian pummelled the region with torrential rain and gusty winds.

Roughly 65,000 Nova Scotia Power customers were still without power by 7:30 a.m Wednesday, down from 400,000 at the height of the storm on Saturday.

About 10,000 homes and businesses were still in the dark on Prince Edward Island, while only 218 were without power in New Brunswick.

Dorian approached the region as a Category 2 hurricane and made landfall near Halifax on Saturday evening as a post-tropical storm with hurricane-strength winds.

The storm uprooted large trees and downed power lines across the Maritime provinces, prompting the Canadian Armed Forces to be brought in to help with the cleanup.

Many students were also headed back to the school on Wednesday, although some schools were still closed due to power outages or lack of water.

Overages to be waived by Telus, Koodo

Nova Scotia was also marred by cell phone coverage problems in the days following the storm, with many people being unable to connect to the network or having limited connectivity. Those issues were addressed by Public Safety Minister Ralph Goodale when he was in Halifax on Tuesday.

He said people with concerns should alert the Canadian Radio-television and Telecommunications Commission.

On Tuesday evening, Telus said in a statement that it has been working around the clock to “support our infrastructure partner, who has restored coverage in the area for our customers.”

The company said it was waiving all domestic voice, text and data overage fees incurred between Sept. 7 and Sept. 14 for its customers in affected areas.

Koodo Mobile was doing the same for its customers.

Low vacancy rates in Halifax leave many without housing