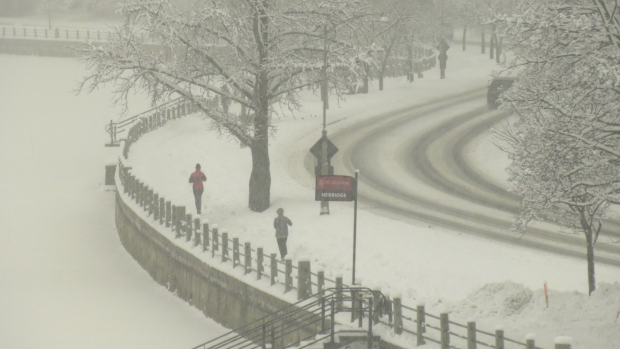 OTTAWA — We could have a messy mix of weather this Saturday in Ottawa.

Environment Canada’s forecast calls for light snow Saturday, becoming heavy at times before the afternoon. About 5 centimetres of snow is expected.

The temperature is forecast to rise to 3C by the afternoon. A chance of drizzle from the early morning forecast was removed in the updated late morning forecast. The current forecast now calls for an overcast sky in the afternoon once the snow moves out of the region. Expect the snowfall to continue through parts of the early to mid-afternoon before tapering off.

Ottawa police and Ottawa paramedics are warning drivers of messy driving conditions. Paramedics say this has led to several collisions.

Fog patches are forecast to develop after midnight. The low is minus 3C.

Sunday’s forecast high is 5C with a 60 per cent chance of showers and a sun/cloud mix.

This makes it the warmest weekend of the year so far in Ottawa.

Monday is looking cloudy with a 60 per cent chance of flurries and a high of 2C.

Sunshine returns Tuesday, but so do cooler temperatures. Tuesday’s high is minus 5C.