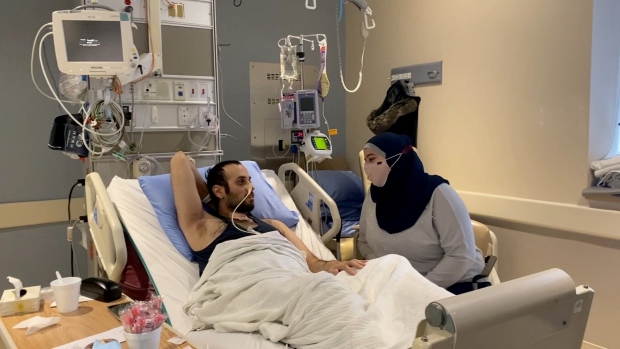 OTTAWA — Khalid Eldali was a healthy 29-year-old before he contracted COVID-19 and almost died from it.

“I don’t remember half the stuff,” Eldali recalled in an interview from his room in the intensive care unit at the Queensway Carleton Hospital, where he’s been for two months. “The only thing I remember is waking up and I saw my wife beside me, that’s all I can remember.”

Eldali contracted the virus in November. His symptoms included chest pains, a fever and a sore throat. When it became difficult to breathe, he called an ambulance.

“Pretty well immediately we had to put him on a mechanical ventilator and place him on life supportive measures,” said Dr. Akshai Iyengar, the chief and medical director of the ICU at the Queensway Carleton Hospital. “He didn’t have lot of reserve time before he got super sick.”

Eldali was on a ventilator for about a month. At times, doctors weren’t sure if he’d survive.

“I received a call from the doctor telling me to come spend a couple of hours with him because we were going to lose him,” said Eldali’s wife Asmaa Addi.

Instead, she said, hours after holding his hands, Eldali “opened his eyes and he [held] my hands. It was the best feeling in the world.”

Eldali came off the ventilator two weeks ago.

“I heard stories that they thought I was not going to make it so I thank the nurses and thank God that they did the best they can to keep me alive,” he said.

Early on, Eldali had developed a rare complication of COVID-19 called multi-system inflammatory syndrome, which has typically only been seen in children who have contracted the virus.

“To get an idea of how that works and the pattern of disease that presents took us quite awhile to figure everything out,” said Dr. Iyengar. “Once we had that diagnosed and treated to the best of our abilities, his condition started to turn to a bit more of a positive route but Khalid went through many days when there was a lot of uncertainty.”

After seeing what her husband has gone through and with case numbers rising, Addi is urging everyone to be more cautious.

“Wear your mask, sanitize, wash your hands, it’s not a joke,” she said.

Eldali said the hardest part has been being away from his wife and six and a half month old daughter. His wife, too, is eager to have him home.

“He has the feeding tube until he gains his muscle back and hopefully we’re going to be back home together as a family,” Addi said.

A simple wish that seemed so far out of reach a few weeks ago is now on the horizon.

“He fought through it, she never lost hope and our team didn’t either,” Dr. Iyengar said, adding that stories like Eldali’s help those on the frontlines push through.

“Certainly things like vaccinations are giving us all some hope and we’re trying to use positive outcomes like Khalid to the best of our ability to keep us going,” said Dr. Iyengar.

Eldali’s message: it can happen to you.

“This is not a joke, it’s real, it can happen to anyone,” he says. “I was in room number one and there was a lady in number two and she passed away at nighttime so this virus is not a joke, take it seriously.”