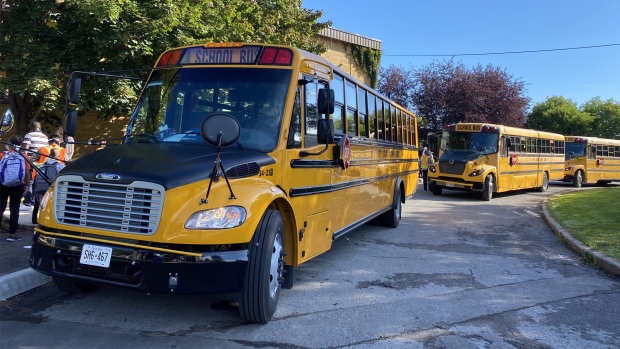 OTTAWA — Ottawa mayor Jim Watson and the city’s medical officer of health Dr. Vera Etches are both calling on the Ontario government to allow schools in Ottawa to reopen.

In his address at the start of Wednesday’s city council meeting, Watson said he’s been meeting virtually with classrooms across the city and has seen first-hand the impact schools closures have had on students.

“When schools closed again in the spring, it became quite noticeable, the steady decline in morale and engagement in students with each passing week,” he said. “I regularly hear from students that they want nothing more than to see their friends and their teachers and to run around in their schoolyard and to have as much of a normal day as one could have during a pandemic.”

Watson said he understands that there are concerns that COVID-19 case counts could rise if schools reopen, but he added that Ottawa Public Health is prepared to handle the additional testing and contact tracing required.

He also noted that vaccines are available not just for teachers, but for people as young as 12.

“Of the approximately 48,500 residents who booked (COVID-19 vaccine) appointments since Wednesday, roughly two-thirds were for 12- to 17-year-olds,” he said.

“Just this past weekend, we saw first-hand what reopening splash pads and outdoor activities can do to a child’s spirit,” Watson said. “We’ve reopened golf courses, basketball courts, and tennis courts; Premier Ford, now is the time to reopen schools.”

Etches did warn that Ottawa is still at risk of a COVID-19 resurgence and urged the community to continue practicing pandemic health measures.

“The level of protection from the COVID vaccine right now is not sufficient,” she said. “We are seeing benefit from the vaccine. We are seeing fewer older adults die, but … the hospital admissions recently are people in their 40s and 50s, and we still want to prevent all the serious illness we can.”

City staff expect 60 per cent of all adults 18 and older in Ottawa will have had at least one dose of a COVID-19 vaccine by the end of the day; however, the number of fully vaccinated people, while rising, remains at around five per cent, according to recent public health figures.

Last week, scientists who advise the Ontario government projected a possible rise in daily COVID-19 case counts of between six and 11 per cent if schools in the province reopened; however, they also said that such an increase could be manageable.

Pediatricians and other health officials have expressed a desire to see schools reopen before the end of the school year as a way to address the mental health impacts on children. Schools have reopened across Quebec for in-person learning and they’ve also reopened in Alberta, where the rate of COVID-19 per capita is higher than in Ontario.

On Tuesday, Dr. Paul Roumeliotis, the chair of the Council of Medical Officers of Health, and the medical officer of health for the Eastern Ontario Health Unit, told Newstalk 580 CFRA that an announcement on schools is “imminent” and he suggested students in some parts of Ontario could be back to class as early as Monday.