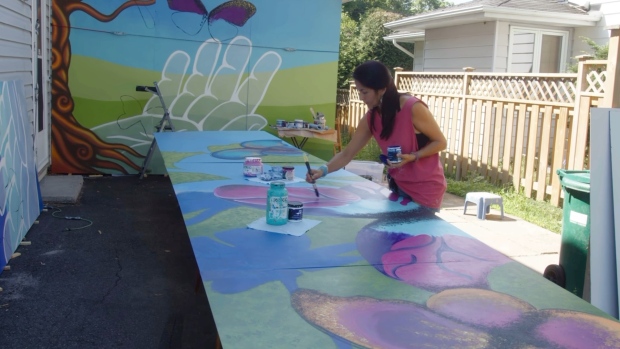 OTTAWA — A new multicultural mural will soon be put up on a building in south Ottawa and its creator says it will be her largest one yet.

Claudia Salguero has been painting murals for seven years. But this one, she says, is one of her most important.

“I decided to create a mural dedicated to Mother Nature and to all the things that are happening right now because I think that the fact that we are so disconnected from nature and so into the rush of the urban life,” says Salguero.

The mural, which will take her roughly six months to complete, will be displayed on the south side of an apartment building on Bank Street.

Salguero called on different cultural elders from around the world to help with the design of the mural that she has named, The Wisdom Mural. Rao Nanduri is one of those elders representing India.

“Many, many cultures have been invited to make inputs. So that we can arrive at the common wisdom of the world and the mural will reflect,” says Nanduri. “Very often we think we are separate individuals, but we are actually a human family. If we are all members of the same family, we should be in practice seeing and acting as one family.”

Nanduri says he was honoured to be part of something so special. Something that will represent what he says is the Canada of today.

“A mural that reminds us, every single day, that we are but one huge family, is very important,” says Nanduri

Salguero admits it will be a lot of work, but hopes that once complete, will be a collection of universal ancestral wisdom.

“It’s supposed to be right now on the walls of that building, but COVID delayed us one year. Now we are three months delayed. Thinking we are going to have it up in October, but it will happen, I am very positive.”

Right now the mural is set to cover a third of the buildings wall but she is hoping to cover the entire thing. If you would like to help grow Salguero’s mural visit her website here.