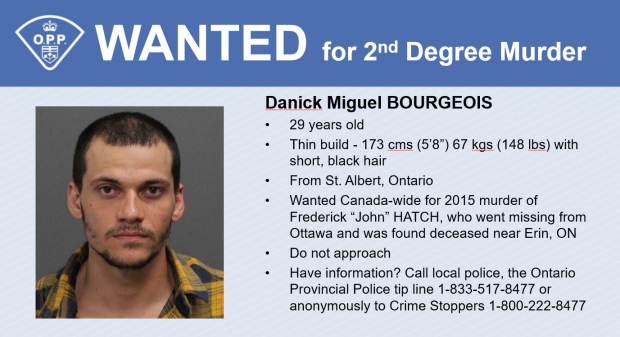 OTTAWA — Ontario Provincial Police have issued a Canada-wide arrest warrant for a man wanted in connection with a 2015 homicide.

Frederick “John” Hatch was last seen on Dec. 16, 2015 in the area of West Hunt Club Road and Merivale Road in Ottawa. His body was discovered 450 kilometres away near the town of Erin, in southern Ontario, on Dec. 17.

Hatch’s death remained unsolved for several years. Police used numerous techniques to find information, including driving a van with his photo around parts of the region and sending text alerts to more than 7,500 people.

In a release Tuesday, OPP said they obtained a Canada-wide warrant for Bourgeois’s arrest and urged him to turn himself in to police immediately.

Police also said a $50,000 reward remains in effect for information leading to the arrest and conviction of the person or people responsible Hatch’s death. Anyone with information about Bourgeois’s whereabouts is urged to call the OPP’s dedicated tipline toll-free at 1-833-517-8477, their local police service, or contact Crime Stoppers at 1-800-222-8477 (TIPS) if they wish to remain anonymous.

Anyone who sees Bourgeois is urged not to approach but to call local police.