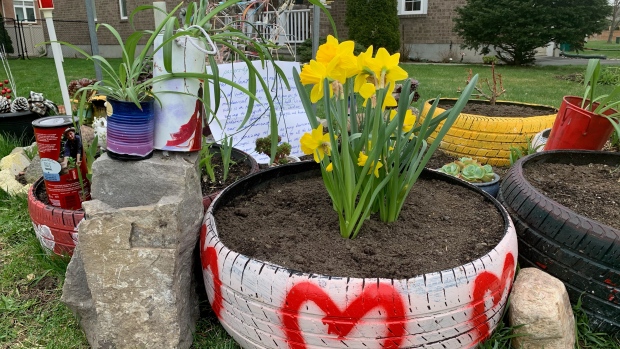 They sit on Jamal Alsharif’s property, a place he and his family have called home for the last three years.

“With these colours, we are trying to help our neighbours passing by giving them a smile on their faces,” said Alsharif.

While gardening on his front lawn on Thursday, he says Ottawa Bylaw and Regulatory Services officers came by.

“They saw my wife and they told her someone called the Bylaw and they have to move the tires because they are against the law.”

Surprised, he reached out to neighbours through the Riverside South Community Facebook page for answers.

“It’s ridiculous,” said one neighbour. “Bylaw has better things to do, especially these days with COVID. They don’t need to be harassing my neighbours.”

The city’s Property Maintenance Bylaw regulates the storage of materials, garbage and deposit around property.

“I don’t think they’re mechanical parts at this point,” said another neighbour. “I think its art work.”

Alsharif says the tires have been on his front lawn for the last three years. This is the first time he’s ever received a complaint from Ottawa Bylaw about his tires.

“And it’s a new problem?” said Jennifer O’Reilly, who also lives nearby.

The Riverside South resident passes by the garden on her walks.

“It’s one of the things my daughter has pointed out on their walks and said, ‘Mom, doesn’t that look nice,'” O’Reilly said.  “Nobody should be able to tell anyone else what to do on their property if it’s not causing any harm to their children or pets.”

So far, there’s been no fine for Alsharif, just a verbal warning.