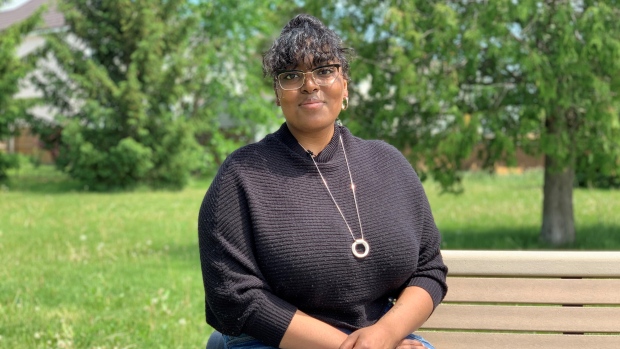 OTTAWA — There comes a time when a child realizes the colour of their skin. For Jialyn Knight, it was age six.

“I had one of my classmates come up to me and specifically ask why I was darker than them,” Knight said.

Born and raised in Ottawa, the 24-year-old was often the only person of colour in her circles growing up.

“I almost felt like that was my role a lot of the time – being that ‘token’ you know you hear that a lot, that token black person,” Knight said.

Your high school yearbook likely has end of the year sentiments, but not for Knight.

“Hello porch monkey, while I don’t know how you managed to escape the cotton fields for long enough to get an education, I’m proud to say you’re my only black friend,” Knight reads an excerpt from a message written in her year book.

These hurtful words you might expect would come from a stranger, maybe an only bully, not a classmate.

“Hello slave. You have been a good worker on my plantation, like I even pretended you were a real person. Good times ahead porch money – it’s okay I’m brining it back!” another message reads.

Both were written seven years ago, but are still as hurtful today.

“I felt like I cut them slack for it. Afterwards, I thought about it and I read those words, they really hurt,” Knight said.

Amid anti-racism protests around the world, she has found the courage to talk about her experiences. Similar to many others, she is no longer willing to stay silent.

“It says a lot if I were to have said this at a different time, it might have just been heard as a passing comment,” she said.

On Friday, a “No Peace Until Justice” march will be held in downtown Ottawa, starting at Parliament Hill.

Knight and her father will take to the streets and she has a message: “We’re here, we have a voice, we need to be listened to.”