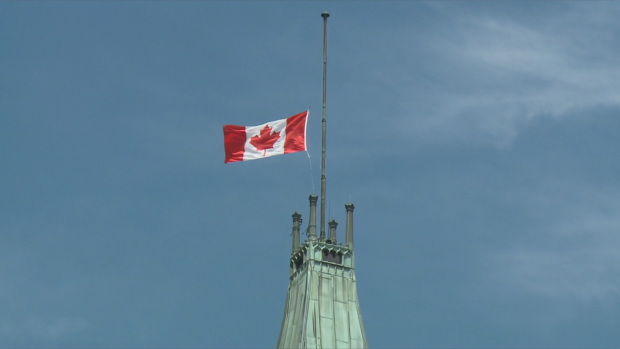 TORONTO — Two days after the remains of 215 children were found buried near a former residential school in Kamloops, B.C., the country is making small steps to acknowledge the enormity of the horrific discovery, including the federal government announcing it would be lowering the flags to half-mast.

Prime Minister Justin Trudeau made the announcement regarding the flags on Twitter on Sunday.

“To honour the 215 children whose lives were taken at the former Kamloops residential school and all Indigenous children who never made it home, the survivors, and their families, I have asked that the Peace Tower flag and flags on all federal buildings be flown at half-mast,” Trudeau tweeted.

His announcement comes a day after the chief of Mississaugas of the Credit First Nations (MCFN) in Ontario issued an open letter to Prime Minister Justin Trudeau, urging his government to lower the flags and declare a national day of mourning.

“Normally, I’m a person who likes to think things through and be very strategic, but there was so much emotional tied to this. I mean, everybody I talked to talked about the pain and hurt they were feeling. So, I said we need to act,” Chief R. Stacey Laforme told CTV News Channel.

In Laforme’s open letter posted on Twitter, he wrote, “We call on the Prime Minister to lower flags of this country and declare a national day of mourning for our children… For these Children and the many others!”

Critics have pointed out that the federal government is still fighting residential school settlements in court, making their words of apology ring false.

“[Canada] needs to stop violating the rights of First Nations, Metis and Inuit children and their families, and then yeah, it needs to accept accountability,” Cindy Blackstock, executive director of the First Nations Child and Family Caring Society, told CTV News.

HONOURING THOSE WHO WERE KILLED

On Sunday, attempts to atone for the atrocities showed up in gestures big and small.

Memorials sprung up across the country, many using rows of tiny childrens’ shoes to visualize the magnitude of what has been lost, taking inspiration from a tribute of 215 shoes that was organized in Vancouver on Friday.

Shoes were placed at the steps of churches and government buildings, establishments that once ran the very schools where Indigenous children were forcibly separated from their families.

The Catholic Church has so far refused to apologize for its role in Canada’s residential schools, and at his regular Sunday blessing in Vatican City, the Pope made no mention of the mass grave in B.C.

Mourners attempted to place shoes was outside the legislative buildings in Queen’s Park in Toronto, but when Shay-lee Anishinaabe Kwe O-Brien and her daughters were trying to organize their own vigil, security approached to tell them to move the shoes off legislative grounds.

Although they were able to put the shoes in place eventually, it was distressing, she said.

“This is a clear display of yet more colonial power being forced upon us as we’re trying to grieve, and it was completely unnecessary,” she told CTV News.

A call has also gone up for Canadians to wear orange shirts on Monday to honour the children killed by the residential school system, with many on social media sharing that they will be donning an orange shirt.

Numerous school systems across the country have posted that they will be inviting students to wear orange shirts tomorrow as well, from elementary schools in New Brunswick to high schools in Alberta.

The British Columbia Teacher’s Federation posted on Twitter that they would be working with local schools across B.C. to organize “orange shirt walk-ins”. They also called for school flags to be lowered to half-mast.

Flags have also been lowered in several municipalities in response to Laforme’s call, including the cities of Toronto, Mississauga, Brampton and Ottawa.

Toronto Mayor John Tory announced on Twitter that flags on city property would be lowered and the Toronto sign dimmed for 215 hours, or nine days, to represent each child.

“I have spoken with Mississaugas of the Credit First Nation Chief Stacey Laforme this weekend and he has asked for our ceremonial flags to be lowered to mourn this unspeakable tragedy,” said Tory.

There have also been calls on social media for Canadians to leave teddy bears out on their porch to honour the children — a gesture echoing the way Canadians placed hockey sticks on their porches in the wake of the Humboldt Broncos bus crash.

The Anishinabek Nation tweeted an image of the Kamloops Residential School on Sunday afternoon, asking people to “place teddy bear(s) on your porch and leave your porch light on,” at 6 p.m. on Monday.

An online petition on Change.org has also been circulating, calling on the federal government to establish a national day of mourning in honour of the 215 First Nations children. As of Sunday afternoon, it has amassed more than 13,000 signatures.

Laforme acknowledges that these gestures alone won’t be enough to achieve reconciliation for what took place at the residential schools but says that they’re an important first step.

“Yes, there are a lot of things that need to be done. There’s a lot of work that needs to be done. But first and foremost, let’s show our love and our respect. And that’s what has to happen first,” he said.

The work to identify and one day repatriate the children buried in B.C. is a task that researchers say will take time.

“I think this has to be done with such care and be very much lead by community,” Kisha Supernant, an associate professor with the University of Alberta, told CTV News.

The Kamloops school operated between 1890 and 1969. The federal government took over the operation from the Catholic Church to operate as a day school until it closed in 1978.

At one point, the school was the largest in Canada’s residential school system out of more than 130 schools.

It’s suspected that other schools may have similar gravesites.

On the grounds of the Regina Indian Industrial School, more than 40 confirmed children’s graves are now protected as a national historical site, but it’s an uphill battle to identify the children.

“We still are not at the level where we know who the students are and I don’t know if we will ever get there,” Sarah Longman, president of the Regina Indian Industrial School Association, told CTV News. “But I certainly believe that somewhere there are some records that we haven’t had access to.”

The Truth and Reconciliation Commission issued its final report on residential schools more than five years ago. The nearly 4,000-page account details the harsh mistreatment inflicted on Indigenous children at the institutions, where at least 3,200 children died amid abuse and neglect.

The federal government has offered support to the Chief of the Kamloops Indian Band, but has not said if it will help other First Nations doing their own work in locating many other missing children believed to be on the grounds of Canada’s residential schools.

With files from the Canadian Press

To honour the 215 children whose lives were taken at the former Kamloops residential school and all Indigenous children who never made it home, the survivors, and their families, I have asked that the Peace Tower flag and flags on all federal buildings be flown at half-mast.

My heartfelt thanks to #IdleNoMore for bringing these shoes to Queen’s Park to remember, honour and grieve the terrible loss of 215 Indigenous children.

These little ones were forcibly taken from their families and community, and died at a residential school in Kamloops, BC. pic.twitter.com/ihk7qf8ndp