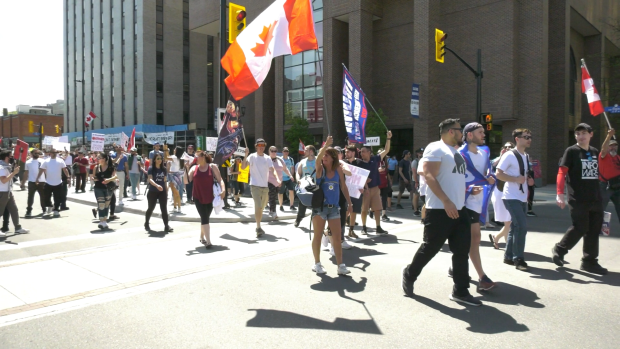 OTTAWA — The York Street Farmers’ Market is adjusting its hours because of planned anti-mask and anti-lockdown demonstrations that are expected to move through the ByWard Market.

A post on the Ottawa Markets blog says last Saturday’s march interfered with vendors at the end of their business day.

“Last Saturday, as our vendors were finishing the day on a high note, an unmasked assembly of approximately 600 people paraded to York Street, where they were greeted with food and entertained by a DJ,” the post reads.

“Our team has spoken to the Ottawa Police and the City of Ottawa to determine the legality of such an event and find a potential solution. Despite, in Ottawa Markets opinion, the rally being dangerous, inappropriate, and against Public Health Guidelines, the anti-masking protest will be allowed to continue.”

“What that did was really create an unsafe environment for our vendors and our customers as we were trying to close things down,” he said.

Dayler said some vendors would have liked to stay longer, but with another planned march expected this Saturday, the York Street Farmers’ Market is closing at 12 p.m. instead of 1 p.m. until further notice to avoid any overlap with future demonstrations.

“I think many (vendors) understand we’re making the right decision,” Dayler said, of the decision. “People have a right to protest, whether we agree with it or not, and what we need to do is try and find a strategy that can coexist.”

However, he admits that losing that last hour will have a financial impact on vendors.

“That last hour tends to be the peak time. That’s when you get the most customers coming through right at the end,” he said. “Our vendors are likely losing the peak sales for themselves this Saturday.”

Dayler said he hopes to return to a time when the market’s hours can be longer once the protests stop.

“Our biggest concern is that a mass demonstration like this doesn’t respect what every single small business in this area and this city and across Canada has gone through,” he said. “I know that the intention is try and get things open sooner but, unfortunately, as we’re close to vaccination rollouts and opening, this type of activity will potentially delay that and further cause us to make adjustments for the farmers’ market this season.”

LISTEN: The York Street Farmers’ Market will close an hour earlier than usual Saturday to avoid an anti-mask protest.