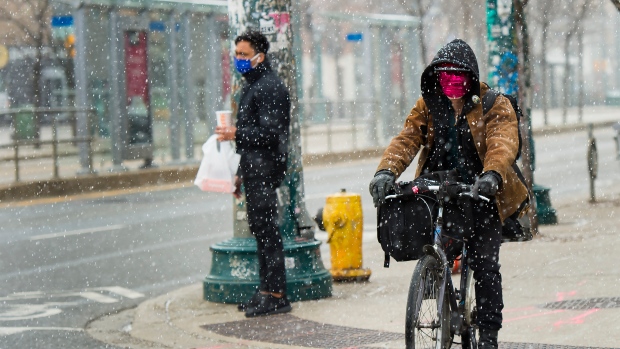 TORONTO — The week may be starting off on a lovely Spring note, but it could be looking and feeling a little more like winter again in Toronto by Wednesday.

A low pressure system is set to develop state-side and sweep across southern Ontario beginning late Tuesday. While there is still uncertainty around the track of the low, and how much snow could fall as a result, a dusting to a few centimetres of snow is not out of the question for GTA.

First, the region will tap into some showers and cooler air Monday night, courtesy of a strong cold front. After enjoying temperatures in the teens Monday afternoon, daytime highs will be below seasonal again by Tuesday.

By Tuesday overnight and into Wednesday, a widespread swath of snow is expected to blanket the southern half of the province.

Areas like Hamilton and Niagara could see the most significant wet snow accumulation, with upwards of 5 cm possible through Wednesday.

Snow in April is not unheard of for the city of Toronto, with an average of 4.5 cm falling in the month. What’s a little less common is accumulating snow this late in April.

By Friday, however, the quick burst of snow may seem like a distant memory – with sunshine and seasonal temperatures forecast to return.