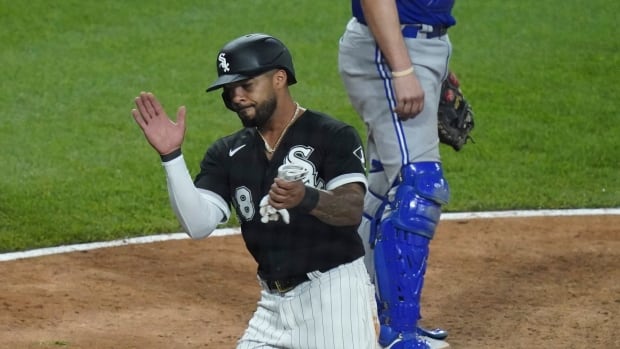 Andrew Vaughn homered in the seventh inning and delivered a tiebreaking sacrifice fly in the eighth, helping the Chicago White Sox beat the Toronto Blue Jays 6-1 on Tuesday night.

Shut out by Robbie Ray for most of the game, Chicago got on the board on Vaughn’s fifth homer and then broke it open with five runs in the eighth.

After Vaughn made it 2-1 with a bases-loaded fly ball to deep center against Trent Thornton (1-2), Adam Eaton drove in Yermin Mercedes with a pinch-hit single. Leury Garcia added a two-run triple, and Tim Anderson capped the rally with a sac fly.

Toronto went 1 for 12 with runners in scoring position and left nine runners on base in the opener of a seven-game trip, wasting a terrific performance by Ray.

Vladimir Guerrero Jr. reached three times for the Blue Jays on a single and two walks. Bo Bichette had two hits and a leaping grab on Jose Abreu’s liner to shortstop in the fourth.

Ray carried a 1-0 lead into the seventh and fanned Yasmani Grandal for the first out. But Vaughn followed with a drive to right-center, chasing the left-hander after 102 pitches.

Chicago then loaded the bases on two walks and a single, but Rafael Dolis escaped the jam when he threw a called third strike past Yoan Moncada.

Ray allowed five hits and walked none in his first career appearance against the White Sox. He leads the Blue Jays with 82 strikeouts in 64 1/3 innings this season.

Toronto put at least two runners on in four of the first five innings, but Jonathan Davis’ sacrifice fly in the second accounted for its only run against Carlos Rodon.