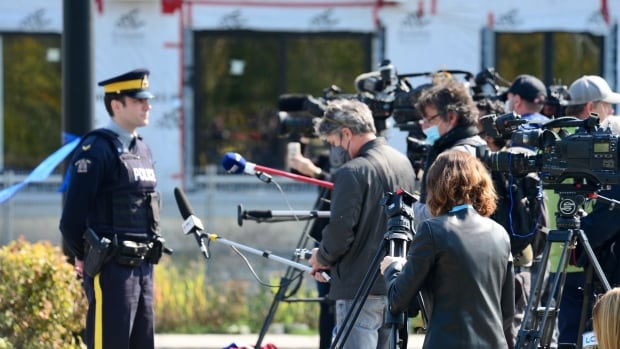 We use this editor’s blog to explain our journalism and what’s happening at CBC News. You can find more blogs here.

While CBC generally does quite well on lists of most-trusted companies in Canada, there’s no question that faith in journalism — around the world — is fragile and wavering.

What happens to a country when it cannot agree on facts and truth or trust the institutions responsible for delivering them?

We don’t have to look far to see how easily a civil society can seemingly begin to unravel. In the United States, still reeling from the deadly attack on its Capitol in January, there are millions of people who wrongly believe the presidential election was stolen by widespread fraud — though it’s important to note more Americans believe it was a legitimate contest than not.

A new report by communications firm Edelman suggests Canada is not immune to the tsunami of institutional distrust at play south of the border.

The annual online survey of 1,500 Canadians found trust declined in all of our institutions after a significant but momentary uptick at the outset of the COVID-19 pandemic.

Those gains have disappeared for all sectors, from business to religion to academia to government. Edelman says Canada faces “a crisis in leadership and expert credibility.”

For most journalists who believe they are on the side of the angels of truth and accuracy, Page 16 of the Edelman Trust Barometer report is sobering. It offers a set of figures in big, bold font that may land as a rather jarring slap in the face to those of us who care deeply about Canadian journalism:

If these figures surprise you, perhaps look no further than to the bottom of this blog, where you will undoubtedly find critics assailing the CBC as a purveyor of biased “fake news” — a charge often echoed on social media and elsewhere. Sure, some of these critics are provocateurs; some will have not read this blog before they begin to critique. But others genuinely believe there are hidden motivations and political agendas behind our storytelling; that we are biased, deliberately misleading or failing our mandate to deliver accurate, fair, balanced and impartial news.

Are we looking at the gasping canary in the coal mine of Canadian democracy?

Plenty of blame has already been dished out for the growing distrust in news media. Some point to the elimination of the U.S. fairness doctrine in the late 1980s and the rise of shock talk radio, then the splintering of audiences on cable TV, then the internet, and later social media and algorithmic filter bubbles that tend to reinforce one’s own world view.

Some blame the growth of punditry over reporting as the ad-supported business model of journalism began to disintegrate and newsrooms shrank or disappeared.

Some media outlets, especially in the U.S., have picked sides as the polarization of their audiences deepened. Others have seriously blurred the lines between what is a journalist, anchor, pundit and columnist.

And, of course, there’s Donald Trump. The former U.S. president’s persistent efforts to repeatedly delegitimize mainstream press as the “enemy of the people” and “fake news” shaped and hardened public attitudes.

As trust has eroded, journalists have found themselves increasingly targeted and harassed. The growing perils of doing journalism in the U.S. were explored in this excellent panel discussion hosted last week by the CBC’s Adrienne Arsenault on behalf of Canadian Journalists for Free Expression (CJFE). It’s worth a watch. And yes, we are seeing increased harassment of Canadian journalists in the field.

What CBC is doing to rebuild trust in journalism

As Canada’s public broadcaster, the CBC has taken a very active role on the “trusted journalism” file. Here’s what we are doing to try to earn and keep your trust in these skeptical times while also battling the growing scourge of disinformation. A few recent measures:

These worthy initiatives notwithstanding, the audience’s trust will ultimately be won or lost on the day-to-day work of our journalists. That begins with an approach to news coverage that is open-minded, fair and genuinely curious. It means challenging our assumptions, testing every fact, avoiding errors and admitting them quickly and transparently when they occur.

It means listening to understand. Does every Canadian we serve believe we will give them and the stories they care about a fair shake? Until the answer is yes, there’s more work to be done.

As always, I trust you will let me know what else we can be doing to earn and keep your trust.