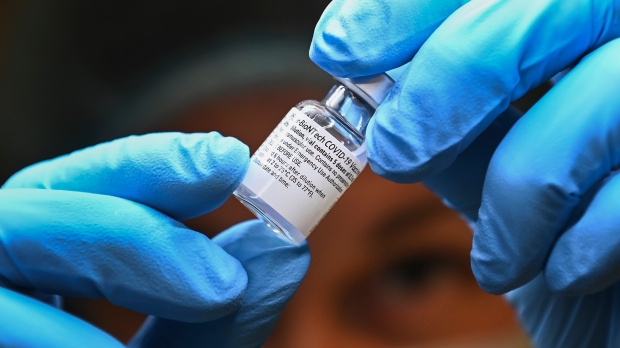 TORONTO — A Toronto doctor is sounding concern that Ontario’s second dose strategy may place an extra burden on seniors.

On Friday, the Ontario government unveiled its plan to start getting people their second doses sooner than the original four-month interval. As part of that plan, those 80 years old and up will be able to book an earlier second-dose appointment starting Monday, May 31, followed by those 70 and up on June 14.

However there are concerns that doing so may be difficult for many seniors who might not be comfortable with computers or who may have other health obstacles that make it difficult to book an appointment for themselves.

Dr. Nathan Stall, a geriatrician at Sinai Health System and assistant scientific director of Ontario’s COVID-19 Science Advisory Table, told CP24 in an interview Friday that becoming eligible to book a second shot is not the same as actually receiving one.

“So they (the province) has neither reserved doses for these older adults for second shots, nor have they guaranteed them bookings,” Stall said. “So this is going to create, I fear, the sort of vaccine ‘Hunger Games’ 2.0 for these older adults, where they’re now being asked to go back onto the multiple booking systems through multiple sites.”

He said rather than put the onus on seniors to re-book their appointments, the province should have proactively reached out to seniors to offer them earlier appointments.

He said he has already encountered some seniors who have said they will not try to book an appointment sooner and will simply keep to the appointment they were given at a 16-week interval.

“That’s very unfortunate for a couple of reasons,” Stall said. “One, we know that especially with the emergence of some variants of concern, we want to protect our most vulnerable with two shots.”

He pointed out that some jurisdictions like the United Kingdom and British Columbia have moved to an eight-week interval for elderly people to try and make sure that they get vaccinated sooner.

The other reason, he said, is social.

He said he has seen some older seniors who haven’t left their apartments throughout the pandemic.

“So, we want people to also get their second doses so they can start to return to some form of normalcy,” Stall said.

Responding to a question Friday about why there is no booking help for seniors spelled out in Ontario’s plan, Health Minister Christine Elliott said she doesn’t think it will be a problem.

“There are very many ways that they can obtain a second shot appointment; through pharmacies, through primary care practitioners, through the online booking tool, through the phone lines,” Elliott said. “We didn’t have a problem with people 80-plus getting their first doses organized and we’re sure that their second doses won’t be a problem either.”

A number of GTA hospitals – including Sunnybrook, Michael Garron and the William Osler Health System – said Friday that they will be reaching out to seniors to move up second-dose bookings as supply and appointments become available.

Stall also pointed out that young, technology-savvy people are going online to find leftover doses and are standing in long lines in the heat to get them if they have to.

He said if there were a better-thought-out plan in place, those doses could be going to vulnerable seniors.

“There could have been a process even before to make sure that these doses, the second doses are going into the arms of the people who really need them,” Stall said. “And I’m fearful just with this whole process being left sort of up in the air with how these older adults are going to get their second doses, that we’re going to see the same chaos that we saw with first doses where people are scrambling across the city and older people and frail people and vulnerable people are going to be left behind again.

– With a report by CP24’s Beatrice Vaisman