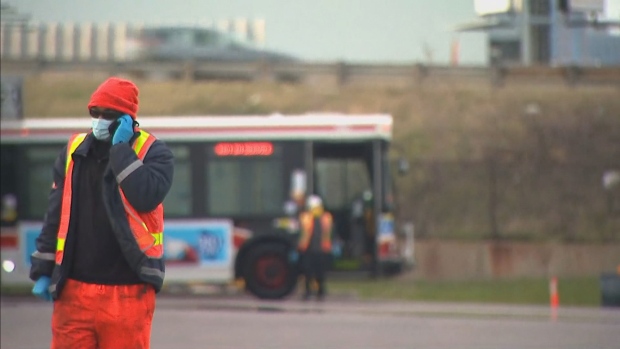 TORONTO — Eight TTC maintenance workers at its Queensway garage have refused to work, citing unsafe working conditions as the union representing TTC workers is urging mass COVID-19 testing of employees at the garage.

In a news release, the Amalgamated Transit Union (ATU) Local 113 said it wants Toronto Public Health (TPH) to send a special mobile unit to the TTC’s Queensway Division, where four people have contracted the virus, and four more have been exhibiting symptoms.

“Our concerns are that this is an outbreak in this garage,” ATU Canada President John Di Nino said.

“We have been asking both the TTC and Toronto Public Health to intervene and take all of the reasonable measures, including testing all of our members on a priority scale to ensure that we stop the curve and eliminate the spread of this virus.”

The union said a COVID-19 outbreak at another maintenance facility was avoided after TTC sent all the workers home as a precautionary measure. However, when an employee at Queensway garage tested positive earlier this week, the transit agency did not send employees home, the union said.

“With respect to the Queensway garage, we did not see the same precautionary measure adopted by the TTC, and furthermore, we want the TTC to implement all of our demands to ensure the safety of all passengers and transit workers,” Di Nino said.

“We need to stop this right now,” he said. “We do not want that lose a member in the line of duty or any of the public who could be potentially affected by COVID-19.”

In addition to the testing, the union said it is also demanding the immediate cleaning of Queensway facilities and vehicles. As well, all workers need to self-isolate with 100 per cent pay for 14 days until they test negative, the union said.

On Saturday evening, the union said TPH sent 30 day shift workers home and asked them to self-isolate until they get their test results.

“Today, we found out about three individuals who are showing symptoms consistent with COVID-19, who had contact with a confirmed case at our Queensway Garage. Those three individuals are self-isolating at home and have been asked to go for testing,” the transit agency said in a statement.

The TTC said they would continue to work with TPH to ensure that those identified as close contacts of a case are in self-isolation. In addition, it said the maintenance area of the Queensway facility has been deep cleaned.

The Ministry of Labour is reviewing the work refusal, the transit agency said.

According to the TTC, the employees at the Queensway Division who tested positive for COVID-19 include a bus maintenance garage coach technician, a general body repairperson painter, and a bus maintenance service person.

They are among the 21 transit employees who have the coronavirus.

On Wednesday, dozens of bus operators at the Queensway bus garage walked off the job due to the lack of masks.

The TTC said Friday it would be distributing masks, in addition to gloves and hand sanitizers, to bus operators this weekend.