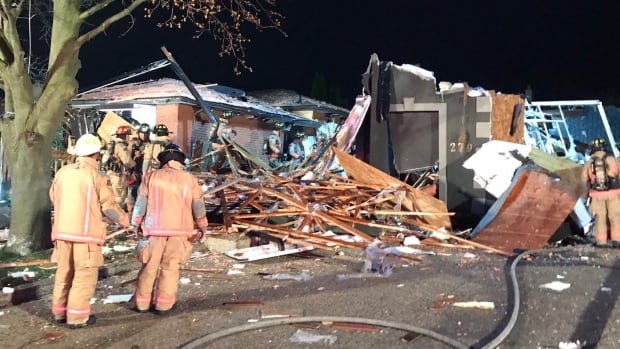 Hamilton firefighters responded late Friday night to an explosion that completely destroyed a house on the Mountain.

The fire department said crews were called to a “multiple alarm” explosion at 279 Bonaventure Dr. near Upper Paradise Road and Hadeland Avenue at about 10:30 p.m. Friday.

Hamilton Fire said in an email that the first crews reported that the home “had been completely levelled and there was a large debris field with damage to a number of homes” nearby, but no evidence of a fire.

“The search at 279 Bonaventure was completed with no one being found. At this time, there have been no reports of any injuries,” the department said in the email.

Crews also reported a strong odour of natural gas in the area.

Soon, more firefighters arrived and started to sift through the debris and make their way into the home. Firefighters checked homes in the area to ensure that “everyone was out, turning off the natural gas services and checking for any natural gas that might be present in the homes.”

“The gas company is on scene and working to secure the area,” Chief Dave Cunliffe said in an email.

“Alectra is also on scene dealing with a power outage related to the blast that is affecting approximately 18 homes in the area. The city’s building department was also on scene inspecting the adjacent homes for any structural issues and stability. The Office of the Fire Marshal has been notified and is responding to assist with the investigation.”

The email said that the extent of the damage has not yet been determined and any people living in the area who can’t return home will be provided shelter by the Red Cross if needed.

Our crews are attending a multiple alarm for a house explosion in the Upper Paradise and Hadeland area. House has completely collapsed with no fire. Crews are checking and evacuating nearby houses. Crews will be on scene throughout the night. <a href=”https://t.co/jkJZZ0yo6q”>pic.twitter.com/jkJZZ0yo6q</a>