With Ontario’s announcement this week that select pharmacies are offering COVID-19 vaccinations, residents have been calling — and even lining up in droves — to get their first dose of the AstraZeneca-Oxford vaccine.

But not everyone is eligible, and the process to book appointments has included some hiccups so far.

So what’s the best way to get your shot through the pharmacy network? Here’s what Ontario residents need to know about how to access this vaccination opportunity.

Only adults between the ages of 60 and 64 years of age — whose birth year falls between 1957 to 1961 — are eligible to get a COVID-19 vaccine through pharmacy locations.

That’s because the shots being offered are the AstraZeneca vaccine — and Ontario has chosen to follow the approach suggested by the National Advisory Committee on Immunizations (NACI).

That body recommended against using this particular vaccine in people aged 65 and older, due to limited early data on its efficacy for that age group. (However, it is being provided to older adults elsewhere in the world, which means real-world data keeps growing. It was previously authorized by Health Canada as safe for use in adults of all ages.)

There is a little wiggle-room when it comes to your exact age for Ontario’s pharmacy sign-ups, though.

“You are eligible if you are 60-64 as of the day of vaccination or, if you will be, or have been, 60-64 in 2021,” a spokesperson for Health Minister Christine Elliott told CBC Toronto. 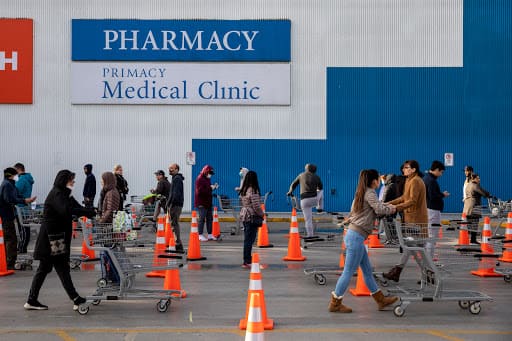 Ontario Premier Doug Ford says over 325 pharmacies will begin administering AstraZeneca’s COVID-19 vaccines to people aged 60-64 by Friday. The AstraZeneca shot will also be given to people in that age category in some primary care settings as well. 1:20

How do you get an appointment?

Select pharmacies in Kingston, Toronto and Windsor started booking appointments on Wednesday, according to provincial officials.

The province also posted a searchable database of participating pharmacy locations on its website, where you can find locations near your home.

Then you can call and book an appointment at the pharmacy of your choice.

However, when CBC Toronto tried calling for appointments on Wednesday, the responses did vary between pharmacy locations — some were able to book in the days ahead, others offered to put names on a wait-list, others didn’t yet have full details on when appointments would begin.

Officials also warned that if someone books a vaccine appointment using either the pharmacy systems or provincial booking portal — set to launch in mid-March — then they won’t be allowed to book another appointment elsewhere.

Can you get a shot by walking in day-of?

The province has been very clear: These shots at pharmacies are meant to be appointment-only.

But already, there have been some hiccups. One Shoppers Drug Mart location in Toronto’s east end started catering to walk-ins — first come, first served — which prompted a long lineup near Danforth and Coxwell Avenues on Thursday.

“There was some confusion today following the government’s announcement about our process to get a covid vaccine in-pharmacy. It is by appointment only,” said a spokesperson for Loblaws in a statement.

“We’re sorry for any inconvenience this has caused and ask that eligible patients, between the age of 60-64, reach out to their local pharmacy by phone to book an appointment.”

What happens when these doses dry up?

This pharmacy vaccination program is happening after Ontario got close to 200,000 AstraZeneca doses — the bulk of which are going to the pharmacies, with roughly 30,000 doses being distributed among primary care providers.

But that’s not the only supply source. More vaccine shipments, also including those from Moderna, Pfizer-BioNTech, and eventually Johnson & Johnson, will be coming Ontario’s way in the weeks and months ahead.

On Wednesday, the federal government announced that vaccine shipments are stabilizing, with a little over 36 million shots are expected to arrive before the end of June — meaning all Canadians are expected to get at least one dose by Canada Day.