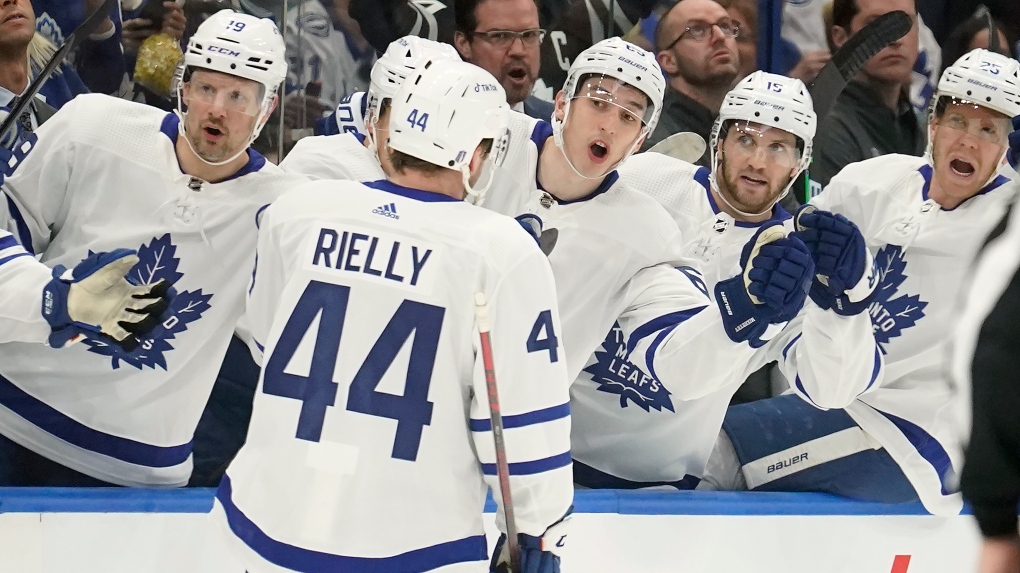 David Kampf scored the winner and Jack Campbell made 32 saves as the Toronto Maple Leafs beat the Tampa Bay Lightning 5-2 on Friday night to take a 2-1 lead in their first-round playoff series.

Morgan Rielly, Colin Blackwell and Ilya Mikheyev, twice into the empty net, had the other goals for Toronto, which wrestled back home-ice advantage in the best-of-seven series after the Lightning won Game 2. Pierre Engvall had three assists.

Ondrej Palat, with a goal and an assist and Ross Colton replied for Tampa. Andrei Vasilevskiy stopped 31 shots for the two-time defending Stanley Cup champions.

Game 4 goes Sunday night back at Amalie Arena before the series returns to Toronto for Game 5 on Tuesday.

Game 6, if necessary, would be back in Tampa on Thursday.

The Leafs are now 13-0-0 when Kampf scores in 2021-22, including twice in the playoffs after he buried another short-handed in Game 1.

After the teams combined for a parade to the penalty box and 22 power plays through the first two contests, Toronto connected on an early man advantage when Tampa winger Pat Maroon was whistled for delay of game.

After a couple of good looks, Auston Matthews and Mitch Marner both had shots blocked in quick succession, but the puck found its way to Rielly off Michael Bunting’s skate for him to fire past Vasilevskiy at 4:54, who came up with a bounce-back performance in Game 2 after giving up five goals on 33 shots in the opener.

The Leafs then killed off a Lightning power play thanks to some big stops from Campbell and then raced the other way on a 3-on-1 break after the penalty expired, with Ilya Lyubushkin – who came out of the box – delaying before feeding Blackwell to bury it into a wide-open net at 9:44 for the first playoff goal of his career.

Fans in Tampa, much like their Toronto counterparts in Games 1 and 2, voiced strong displeasure at the officials later in the period following another Lightning penalty, with chants of “Ref you suck!” echoing around the sold-out building.

The Leafs, who are looking to win their first playoff series since 2004, had a 5-on-3 power play early in the second that the home side killed off, but Kampf made it 3-0 with an unassisted effort at 5:52 off a turnover in the neutral zone.

Colton got the Lightning on the board at 11:03 on a power play when he blasted a one-timer up high on Campbell. The Tampa forward had a great chance to make it 3-2 a little later in the period, only to hit the post with the Toronto goaltender at his mercy.

Toronto, which beat Tampa 5-0 in Monday’s Game 1 before the Lightning responded with a 5-3 triumph two nights later, had a great opportunity to restore the three-goal lead five minutes into the third, but Vasilevskiy stopped Matthews on a break and the 60-goal man’s rebound effort.

Palat made it 3-2 moments later at 5:43 when he wristed a shot over Campbell’s shoulder.

Tampa got its third power play of the night with 7:46 left in regulation when Jake Muzzin went off for hooking. Campbell robbed Steven Stamkos on a one-timer before snagging a Victor Hedman snapshot from the slot.

The Leafs netminder, who rediscovered his game late in the schedule, held the fort from there until Mikheyev scored the first two playoff goals of his career into an empty net to secure the victory and a 2-1 lead in the series.

Notes: Toronto forward Jason Spezza and defenceman Justin Holl made their series debuts after being scratched for Games 1 and 2 … Leafs winger Kyle Clifford was eligible to return to the lineup following a one-game suspension, but sat out along with fellow hard-nosed forward Wayne Simmonds. The latter took two costly and undisciplined penalties in Game 2 that resulted in two power-play goals against.

This report by The Canadian Press was first published May 6, 2022.