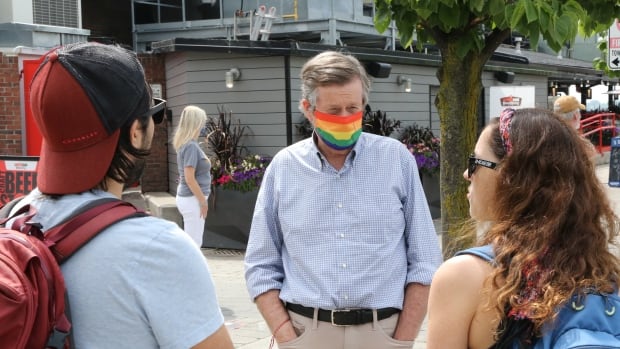 The municipal government leaders, who met virtually on Monday, unanimously agreed to make the request to the government now that the entire region has moved into Stage 2 of the province’s reopening plan.

Mandatory masks indoors would help to stop the spread of COVID-19 and support the reopening of the economy, the mayors and chairs said in a news release on Monday.

“We are at a critical time in the fight against COVID-19. We must do everything we can to avoid flare-ups of the virus in our communities,” the municipal leaders said in the release.

Medical officers of health have said repeatedly that people should wear non-surgical face masks when it is not possible to engage in physical distancing, the mayors and chairs noted.

“Public health officials have been clear that keeping your distance, at least six feet or two metres, from others is the best way to prevent the spread of the virus,” the release said.

“Those same officials have also been clear that when people can’t keep their distance, they should wear a fabric mask or face covering. Every person wearing a face covering properly is protecting those around them from the risk of virus spread.”

The mayors and chairs said such an order, while it should apply to indoor public settings, would have exceptions depending on the age of the person and individual health conditions.

The municipal leaders said they will work with medical officers of health from local public health units to determine how best to lobby for the “universal wearing of non-medical masks” in indoor places, which would include businesses and transit systems.

In the release, the mayors and chairs noted that some municipalities already require mandatory mask wearing in certain circumstances.

For example, in Toronto, the TTC will require riders to wear face masks when riding subways, streetcars and buses as of July 2.

“Committing to regional action on face coverings is one more way the GTHA municipalities are working to support the restart of our economy, which is crucial to the economic success of Ontario and Canada,” the mayors and chairs said.

The municipal leaders said they are also continuing to call on the federal and provincial governments to offer financial support to municipalities for additional costs of the pandemic and revenues lost.

STATEMENT: I am pleased to see the momentum growing for my call to make masks mandatory in indoor spaces. I join my fellow GTHA Mayors and Chairs as we ask the Provincial Government to make this policy mandatory for large urban municipalities. <a href=”https://twitter.com/hashtag/onpoli?src=hash&amp;ref_src=twsrc%5Etfw”>#onpoli</a> <a href=”https://t.co/wqh1OsfgdE”>pic.twitter.com/wqh1OsfgdE</a>