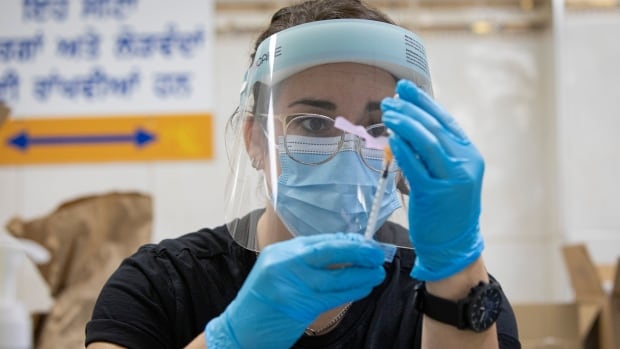 Ontario has reported its first death of a person who developed rare blood clots after receiving a first dose of the AstraZeneca-Oxford vaccine.

It was one of 41 deaths linked to COVID-19 reported on Tuesday. Dr. Barbara Yaffe, the province’s associate medical officer of health, said the person who died was a man in his 40s who had received his first dose in late April. He died a few weeks later.

Yaffe said the man was confirmed to have a rare but serious condition called vaccine-induced thrombotic thrombocytopenia (VITT).

“While the investigation is ongoing and a final cause of death has yet to be officially determined, it has been confirmed that the individual did have VITT at the time of his death,” she said.

“Again, the risks associated with this vaccine are rare, but they are real,” she added.

“I want to extend my deepest and heartfelt sympathies to the family and friends of this individual in the wake of this tragic death.”

Thirteen of those cases meet the criteria for VITT.

“I want to take this opportunity to reiterate that those who received AstraZeneca vaccines should feel confident in their decision. Of course, if you have any questions of concerns, do not hesitate to reach out to your health-care provider,” she said.

Nearly one million people in Ontario aged 40 and older have received the AstraZeneca vaccine.

Ontario stopped giving out first doses of AstraZeneca earlier this month after what it said was an increased risk of the rare blood clots associated with the vaccine.

The province also confirmed another 2,485 cases of COVID-19 over the last two days.

Because of the Victoria Day long weekend, the province provided two days worth of data Tuesday morning.

As expected, overall testing levels were quite low through the holiday weekend, with just over 37,000 total tests completed in the same two-day period. That said, positivity rates continued on a downward trend, suggesting that even with less testing, there are indeed fewer new cases occurring in the province compared to recent weeks.

The seven-day average of daily cases fell to 1,693, its lowest point in more than eight weeks.

There are currently about 19,026 active COVID-19 infections provincewide, the fewest since March 29.

As of Monday evening, there were 692 people being treated for COVID-related illnesses in intensive care units. Of those, 498, or about 72 per cent, required a ventilator to breathe.

Yaffe said the province is seeing improvement in the number of hospitalizations and people in ICUs.

“These trends remain encouraging, but the numbers are still very high. They represent people who are very ill from this disease,” Yaffe said.

The additional deaths pushed the official toll to 8,655.

Public health units collectively administered 186,035 more doses of COVID-19 vaccines in the same timeframe. A total of 8,251,642 shots have been given out so far and about 64.3 per cent of Ontarians aged 18 and over have had at least one dose.

In Toronto, nearly two million shots have been administered to date, with the city saying more than 65 per cent of eligible adults have received at least one dose.

Meanwhile, Ontarians who received a first dose of the AstraZeneca COVID-19 vaccine in mid-March will be able to book their second shot this week as the province seeks to use up its stockpile before it expires.

Those who received a first shot from March 10 to March 19 are being prioritized for a second. Those dates encompass a pilot project that saw the AstraZeneca vaccine administered through pharmacies in Toronto, Kingston and Windsor, as well as through some primary care providers.

Though the recommended interval between shots is at least 12 weeks, the second injection is being offered to that group after 10 weeks in order to make use of 45,000 doses set to expire in roughly a week. Another 10,000 doses of AstraZeneca are due to expire next month.

Ontario currently has more than 300,000 doses in stock after a significant shipment arrived last week.

The province has said those who got their first dose of AstraZeneca after March 19 will be able to book their second in the near future, but no additional details have been provided so far.

AstraZeneca has been linked to rare, potentially fatal blood clots that are thought to occur at a rate of one in every 55,000 or so doses on the first shot, and one in 600,000 doses for the second.