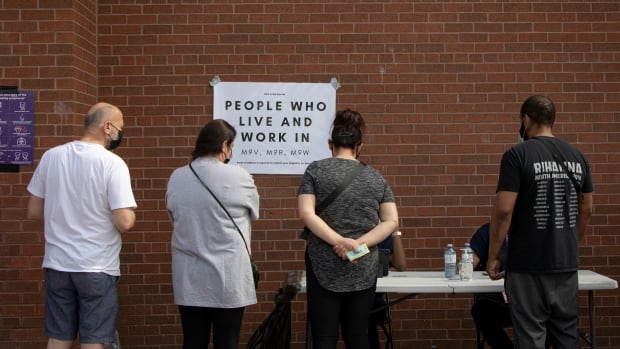 Ontario reported 699 additional cases of COVID-19 on Tuesday — the fewest on a single day since October 2020, during the earlier weeks of the second wave of the pandemic in the province.

The news comes as the National Advisory Committee on Immunization (NACI) said that Canadians who received a first dose of the AstraZeneca vaccine can safely receive an mRNA vaccine, such as Pfizer or Moderna, for their second.

For Canadians who have had a first dose of Moderna or Pfizer, NACI advised they can now take either of the two shots as a second dose — because they both use a similar mRNA technology.

Officials in Ontario suggested at a briefing last week that they want to move ahead with mixing vaccines to maintain the progress of the immunization effort, but said they were waiting for formal guidance from NACI before going forward.

At a news conference this afternoon, Health Minister Christine Elliott said that Ontarians who received a first shot of AstraZeneca will have a choice about their second shot.

She also said that she expects the 254,500 doses of AstraZeneca the province currently has will be shipped out to pharmacies and primary care physicians soon for use as second shots, and that people seem eager to receive it.

“We haven’t seen any vaccine hesitancy for AstraZeneca when it comes to second doses,” Elliott said. “They want to take it.”

The case count reported today marks the second straight day in Ontario below 1,000, and is down considerably from last Tuesday’s total of 1,039

Labs completed 20,262 tests and Public Health Ontario logged a positivity rate of 3.6 per cent, also down significantly from last Tuesday’s 6.2 per cent.

Just Toronto and Peel Region saw triple-digit increases in cases, with 207 and 144, respectively.

As of Monday, there were 583 people with COVID-related illnesses being treated in intensive care. Of those, 387, or roughly 66 per cent, needed a ventilator to breathe.

The Ministry of Health recorded the deaths of nine more people with the illness, pushing the official toll to 8,766.

Meanwhile, public health units collectively administered another 120,195 doses of COVID-19 vaccines yesterday. About 57.4 per cent of Ontario’s total population has now had at least one shot.