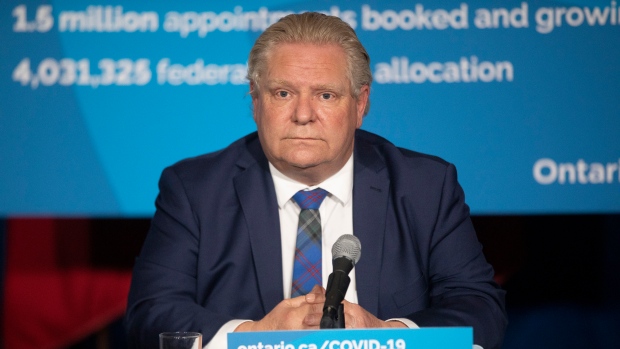 TORONTO — Ontario Premier Doug Ford has announced schools will remain closed to in-person learning for the rest of the academic year but says the province might be able to enter Step 1 of the reopening plan earlier than expected.

Ford made the announcement alongside Education Minister Stephen Lecce at Queen’s Park on Wednesday.

The decision contradicts the provincial government’s previous promise to reopen classrooms before the economy, which was originally set to begin on June 14.

“It was a hard choice to make, but I will not, and I repeat, I will not take unnecessary risks with our children right now,” Ford said Wednesday.

Ford said he is now waiting for advice from Chief Medical Officer of Health Dr. David Williams about whether the province can push forward the Step 1 date.

“We’re doing as well as a province can do,” Ford said. “As things are going, we may be able to enter Step 1 safely earlier than June 14th.”

“I know it’s very important for people in Ontario to get to step one to get, to step two as soon as it’s safe to do so.”

Step 1 would allow for outdoor gathering limits to increase to 10 people, the reopening of patios, and non-essential retail at 15 per cent capacity.

Camping would also be allowed to resume in Ontario.

Ford did not say when the decision would be made.

A source told CTV News Toronto earlier on Wednesday the government is still waiting to see whether the Victoria Day long weekend will lead to an “uptick in cases” this weekend, or whether province will continue to see a decline in transmission that follows the recent trend.

Schools have been closed for in-person learning since mid-April, when the province announced they would be shut down indefinitely due to skyrocketing COVID-19 transmission in the province.

When Ford closed schools in April, he said he wanted “nothing more than to be able to open the schools up again as soon as possible.”

Chief Medical Officer of Health Dr. David Williams has previously stated that he wants to see children return to the classroom before the economy reopens.

This is a developing news story. More information to come.