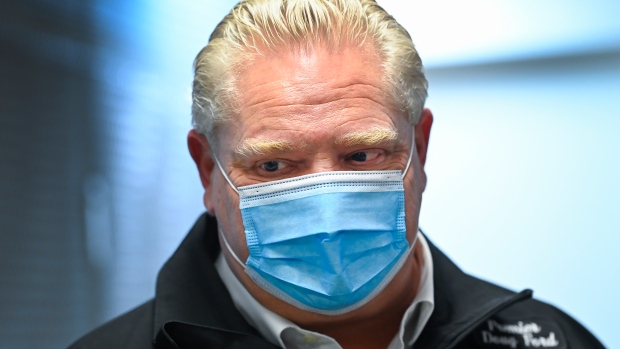 TORONTO — Ontario Premier Doug Ford confirmed the province will make an announcement Thursday afternoon about whether students will return to in-person learning amid a surge in COVID-19 cases.

Ford made the comment on Thursday after sources told CTV News Toronto new provincial data has raised “significant concerns” about the spread of COVID-19 among school-aged children over the Christmas holidays.

Ford said the announcement will come from Chief Medical Officer of Health Dr. David Williams, who is scheduled to speak to reporters via teleconference at 3 p.m. The education minister is not scheduled to attend the briefing.

Watch the announcement live in the player above at 3 p.m.

“Young kids under 13, the positivity rate is up towards 20 per cent.”

Ford blamed the increased positivity rates in children is a result of people getting together over the holidays.

Sources told CTV News Toronto that new data currently being reviewed by Ontario’s Chief Medical Officer of Health shows the positivity rate among children aged 12 to 13 quadrupled over the course of December, building the case for an extended closure of in-school learning.

A senior government source told CTV News Toronto the dramatic increase in the positivity rate is “alarming” and has “raised significant concerns about kids returning to school next week.”

“Most troubling, the positivity rate for kids aged 12-13 years old increased from 5.44 per cent in late-November, early December to nearly 20 per cent in the early new year,” the source told CTV News Toronto.

The data under review shows a steady increase in the number of positive cases and the positivity rate among elementary students over the course of December.

The Ford government continues to insist that schools are not a source of transmission, despite the increase in positivity rates taking place while students were still in school.

On Wednesday, the Elementary Teachers Federation of Ontario penned an open letter to the premier, minister of education and provincial health officials asking for an extension of virtual learning amid a rapid rise of COVID-19 cases in the community.

“We have taken the extraordinary step to ask Public Health Units to use their authority to reconsider the decision to resume in-person learning for elementary students on Jan. 11, particularly in communities where the rate of community transmission is high and where other extreme public health measures have been deemed necessary,” the letter reads.

“We ask that you reconsider your decision to resume in-person learning for elementary students on January 11.”