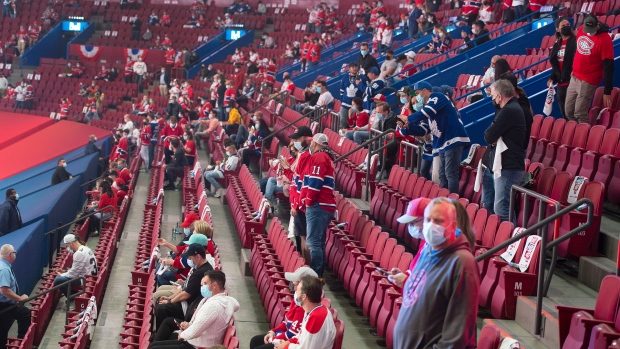 TORONTO — Ontario is just not ready to allow any number of spectators inside Scotiabank Arena for the final and decisive game in the NHL playoff series between Toronto and Montreal on Monday night as Quebec allowed on Saturday.

For a first this year in Canada, public health officials in Quebec allowed 2,500 spectators inside Montreal’s Bell Centre on Saturday, with some spending five-figure sums to watch the Habs cling to survival with an overtime Game 6 win.

“Given the fact that a large number of our essential workers and healthcare workers who have given so much over the last year are fully vaccinated, this would be a way to give the Maple Leafs a boost,” Brown told CP24, adding that U.S. CDC guidance says fully inoculated individuals can be indoors, unmasked without risk.

Asked if they would allow it, an Ontario Ministry of Heritage, Tourism, Culture and Sport spokesperson said it was just not possible for Monday.

“The Office of the Chief Medical Officer of Health reviewed and approved the NHL’s return-to-play plan for the Toronto Maple Leafs and Ottawa Senators. The return-to-play plan includes rigorous health and safety protocols developed to ensure the safety of players, staff, their families, and the community,” Dakota Braiser told CTV News Toronto. “At this time, no spectators are allowed to attend games in-person.”

“The province will continue to follow the advice of the Chief Medical Officer of Health, other health experts and local public health to determine when and if it is safe for measures to be lifted based off the Roadmap to Reopen.”

Toronto Mayor John Tory told CP24 Sunday that it was entirely up to the province whether to allow fans, but he himself would support a measured return for some spectators to return.

“I would probably take a serious look at doing something inside because you can see from what happened in Montreal that people were spaced far apart and there were some masks being worn, probably not as many as what should have been the case.”

Ontario’s NHL’s return to play plan does allow the team to dine indoors together and exercise indoors, activities not allowed for the general public since March, provided they submit to regular testing.

As of Saturday, Ontario’s rate of active cases per capita was roughly double that of Quebec, with Ontario seeing 98 active infections per 100,000 to Quebec’s 52, according to data compiled by the Public Health Agency of Canada.