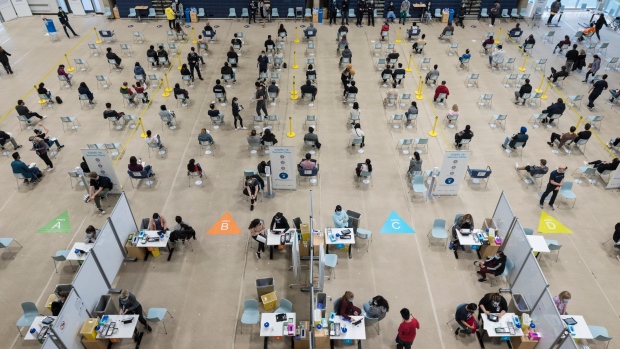 TORONTO — Toronto and Peel will begin offering both mRNA vaccines at their mass immunization clinics in an effort to reach people who are hesitant to mix doses despite pubic health advice that suggests it is safe.

The clinics began administering both the Moderna and Pfizer vaccines interchangeably in June but there have been anecdotal reports since then suggesting that some individuals have walked out after being told that they would receive a different vaccine than the one they got for their first dose.

Last week Peel Public Health began a new initiative called “Pfizer Fridays” to reach some of those people and it proved to be a success with thousands of appointments being booked.

Now officials in both Peel and Toronto say that they will begin offering both Pfizer and Moderna at all of their clinics so long as supply permits.

The shift, which will take effect this weekend, comes amid an expected increase in supply of the Pfizer vaccine with Ontario getting 1.2 million doses this week and nearly 1.6 million doses next week.

Toronto says that it will also make first-dose vaccinations at its nine clinics walk-in only as of Monday in an effort to further remove barriers.

More than 80 per cent of eligible Ontarians have now received at least one dose of COVID-19 vaccine and nearly 65 per cent are fully vaccinated.

Chief Medical Officer of Health Dr. Kieran Moore has, however, suggested that the province should be trying to get its vaccination rate up to at least 90 per cent due to the increased transmissibility of the Delta variant.