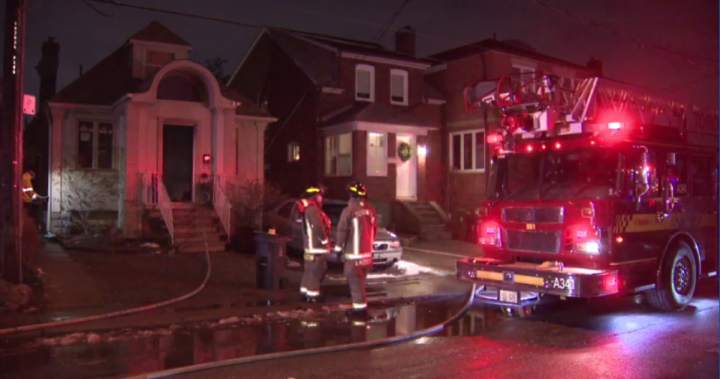 Officials say a person is dead after a two-alarm fire in Toronto late Wednesday.

Emergency crews were called to the area of Glenhome and Clovelly avenues, near Oakwood and Eglinton avenues, at 9:50 p.m.

A spokesperson for Toronto fire said the blaze was deemed a two-alarm and added that several people were able to make it out of the basement and one person from the second floor had minor smoke inhalation.

A deceased victim was located in the rear of the first floor, the spokesperson said.

It’s unclear if the incident is being considered suspicious. An investigation is underway by fire crews, police and the Ontario fire marshal.

Deepest condolences to family, friends and all those impacted by the fatal fire on Clovelly Avenue tonight. Our @Toronto_Fire investigators will work with @ONFireMarshal to determine the origin, cause and circumstances of this terrible fire.

FIRE: UPDATE
Clovelly Av + Glenholme Av
– police are on scene@Toronto_Fire is on scene advising a 2 alarm fire
– person has been located deceased inside the home@ONFireMarshal has been notified#GO2451303
^lb