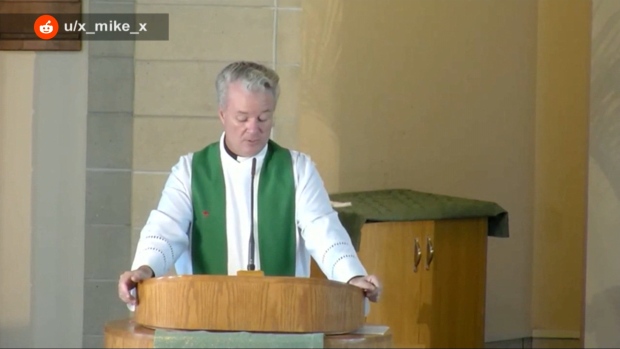 TORONTO — A priest in Mississauga who made comments about the “good that was done” by the Catholic church in residential schools has resigned.

On Friday, the Archdiocese of Toronto tweeted that Cardinal Thomas Collins has accepted the resignation of Monsignor Owen Keenan as pastor of Merciful Redeemer Parish and placed him on an indefinite leave of absence.

“We apologize for the pain caused by his recent remarks,” the archdiocese tweeted.

Regarding Msgr. Owen Keenan, Pastor of Merciful Redeemer Parish in Mississauga, Ont. Cardinal Collins has accepted Msgr. Keenan’s resignation as pastor and placed him on an indefinite leave of absence. We apologize for the pain caused by his recent remarks.

Keenan came under fire earlier this week after a clip of his sermon talking about Canada’s residential school system was posted online.

“Two-thirds of the country is blaming the church, which we love, for the tragedies that occurred there,” he said in a clip of the sermon posted to Reddit. “Now I presume that the same number would thank the church for the good that was done in those schools, but of course, that question was never asked and in fact, we are not allowed to even say that good was done in those schools.”

Keenan apologize and, in a statement, acknowledged “the pain and anger which has been magnified” by his remarks and pledged “to do better.”

“I am deeply sorry, embarrassed, ashamed and shocked at the revelations of abuse, destruction and harm done in residential schools across this country,” he said. “As a Catholic and a Priest, I in no way condone the residential school system, I regret deeply that these places existed, and I lament the harm that was caused. If and when I get a chance to meet survivors, I will seek their forgiveness.”

Since the remains of 215 Indigenous children were discovered at a former residential school in British Columbia, there have been renewed calls for the Catholic church, which ran the majority of residential schools in the country, to apologize for its role and release all its records pertaining to the schools.

The pope has not issued an apology, but several Canadian archbishops, including Collins, have said sorry for the church’s role in what happened.

On Wednesday, at least 751 unmarked graves at the site of the former Marieval Indian Residential School in Saskatchewan.

The Indian Residential Schools Resolution Health Support Program has a hotline to help residential school survivors and their relatives suffering trauma invoked by the recall of past abuse. The number is 1-866-925-4419.

– with files from Chris Fox, The Canadian Press