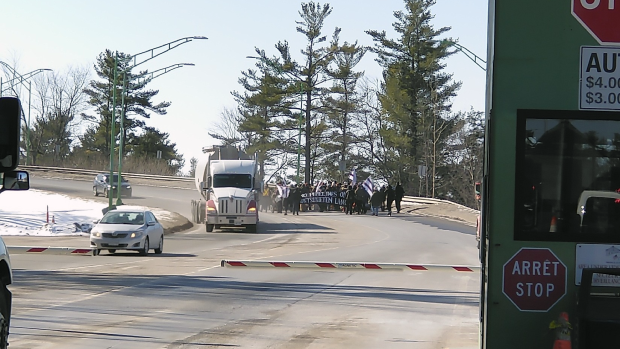 OTTAWA — Protesters have blocked access to the Thousand Islands Bridge as families return home after the Family Day long weekend.

The Thousand Islands Bridge Authority says traffic restrictions to Canada are in effect due to protesters on the Canadian span of the bridge crossing.

In a message on Twitter, Ontario Provincial Police announced Highway 137 is closed in the Lansdowne area, including access from Highway 401 eastbound and westbound and access to the United States.

Motorists planning to head to the U.S. are being urged to plan an alternate route.  The Ogdensburg-Prescott International Bridge is approximately one hour away on the Canadian side. Ministry of Transportation cameras on Highway 401 in the Lansdowne area show traffic backed up from Highway 137 to Highway 401.

Tom Bush of Duty Free America near the U.S. border tells CTV News Ottawa officials are stopping traffic about four miles before the store, and re-directing them to the Ogdensburg-Prescott International Bridge. Duty Free America is the last business before motorists hit the border.

The Thousand Islands Bridge Authority tells News Talk 580 CFRA a group of protesters have a sign and are blocking the parkway overpass, but they’re not on the bridge itself.

This is a developing story. We will have more details as they become available.