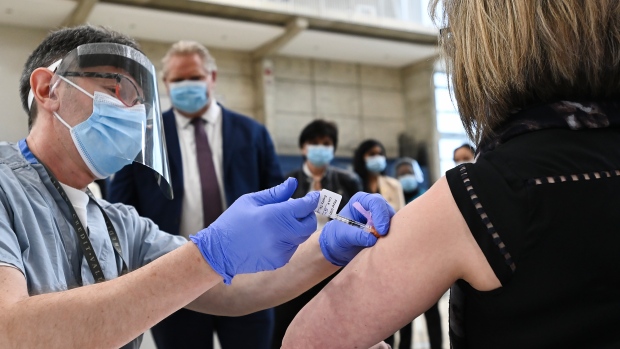 TORONTO — A member of Ontario’s vaccine task force says that there will “absolutely” be some people jumping the line for COVID-19 vaccines in the second phase of the province’s rollout but he says the issue can be at least partly mitigated by having more family doctors administer shots.

The Doug Ford government has said that it will prioritize nearly three million people with pre-existing conditions as part of the next phase of its vaccine rollout but it has released few details on how it will identify those people and verify their medical history.

That has led to some concerns about queue-jumping, which could ultimately mean that the people most at risk of a severe outcome from COVID-19 have to wait longer for their shots.

“Listen it is not going to be perfect. Even if we have primary care expanded and in their clinics vaccinating individuals where they know their patients and they know who would be a good candidate for the first part of phase two and the second part of phase two that doesn’t fully solve this problem,” infectious disease specialist Dr. Issac Bogoch, who sits on Ontario’s vaccine task force, told CP24 on Tuesday morning. “There will be some honour system and you know what this isn’t perfect. There will be some people who jump the line, there will be, there absolutely will be. This is going to be a challenging thing to police.”

The Ford government has provided a list of 24 health conditions that would qualify residents for vaccines ahead of the general public and has broken them up into three categories – highest risk, high risk and at-risk.

Bogoch said that he doesn’t believe the issue of que jumping will be a significant problem for the province, especially given the fact that the vaccines themselves will become a much less “limited resource” in the coming months.

He said that the government will have to find some better ways to verify medical conditions but he also conceded that we will have to “rely on peoples goodwill to wait their turn for vaccination” to a certain extent, as well.

In a statement provided to CP24, a spokesperson for Health Minister Christine Elliott said that planning is still underway on how the province will deal with people with pre-existing conditions.

But the spokesperson said that “these individuals will not typically be booking their appointment through the provincial online booking portal, or receive the vaccine at mass vaccination clinics.”

Instead, the spokesperson said that most of the vaccinations administered to people with pre-existing conditions will be “administered through other channels, such as specialty clinics or through their existing health care providers who already have the individual’s health records on hand.”

Of course, some are still concerned about whether the most vulnerable people will indeed receive their shots first in the second wave, especially when you look at the sheer number of Ontarians with pre-existing conditions.

Dr. Michael Warner, the medical director of critical care at Michael Garron Hospital, told CP24 on Tuesday that the issue is that the government has set up a system, where there is “is no specificity in terms of what a respiratory disease is, what heart disease means.”

That, he warned, could lead to widespread abuse, especially if family doctors are kept out of the process.

“It means that the people who need the vaccines the most will not be triaged to get them earlier than others and also family doctors have been cut out of the entire process,” he said. “They are the ones best equipped to triage their own patients assuming we have carve outs for those without family doctors to make sure they get access too.”

Ontario has said that it hopes to vaccinate an additional 7.5 million residents as part of the second phase of its vaccine rollout.

Other priority groups include older adults, essential workers and those who cannot work from home, along with residents and staff in congregate settings.