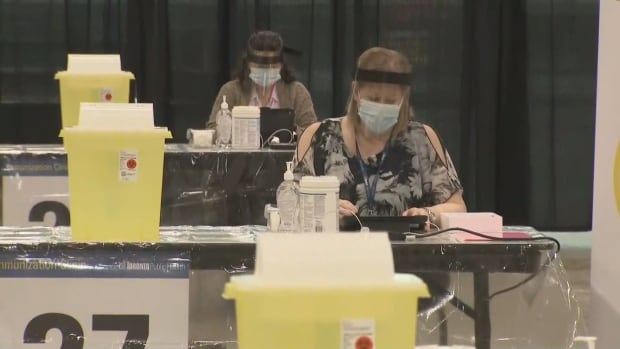 The City of Toronto’s first COVID-19 immunization clinic, which opened on Monday, is set to close on Friday due to the lack of access to the Pfizer-BioNTech vaccine.

The city’s existing vaccine supply will be redirected toward people identified as high-risk in phase 1, including long term care residents and health-care workers.

“The fact that we learned today that we are going to have to pause only after the first week is very disappointing to all of us,” said Chief Matthew Pegg in a news conference Monday afternoon.

All vaccine appointments after Friday are cancelled.

The clinic’s aim is to vaccinate 250 people per day, which is below the its expected administration of 2,500 doses a day when the clinic operates at capacity, according to Pegg.

“We are initially operating this clinic at this scaled back capacity in direct response to available vaccine,” he said on Monday.

The clinic will vaccinate healthcare workers involved in harm reduction and Streets to Homes staff who support the city’s vulnerable populations.

The clinic’s opening comes as the province reported 2,578 new COVID-19 cases Monday, the fewest number of cases since early January.

The city’s new clinic will be testing how to set up in a non-hospital setting, while also ensuring safety and efficiency.

“We will continue to assess and evaluate and learn from the experiences we will gain from the first five days,” he said. “Then we will have to reach a decision … as to whether we pause that playbook pending the restart of the clinic.”

Toronto is reporting 892 new cases of COVID-19, with 491 people currently in hospital and 113 in intensive care units,  along with two new deaths. There are currently 50 active outbreaks in long term cares homes in Toronto, and 12 in retirement homes, Dr. Eileen de Villa, the city’s medical officer of health, announced Monday in a COVID-19 briefing.

“This suggests that the lock down on Dec. 26 has had some impact,” said de Villa.

City cracking down on enforcement

The city says it is also ensuring that businesses comply with the the province’s latest order under the Reopening Ontario Act.

Between Jan. 15 and Jan. 17, officials received 165 complaints related to non-essential businesses and issued 10 charges, according to a statement from the city.

They note Toronto Police did attend “protests at public squares.”

A small number of Toronto-area shelter clients and staff are now eligible to receive COVID-19 vaccines as part of an effort to vaccinate vulnerable populations, according to a press release from Unity Health Toronto.

The move is a pilot project that will help guide “the eventual province-wide effort to protect people experiencing homelessness,” the health network said.

“Many people experiencing homelessness have also stopped using shelters due to a fear of contracting COVID-19.”

The release says priority will be given to sites with high senior populations.

Scarborough Village Residence, a city-operated shelter, was the first pilot site, where more than 80 people were vaccinated with the Pfizer-BioNTech vaccine, including 50 senior residents.

Hundreds of shelter staff and clients are expected to be vaccinated, with the pilot concluding “in a few weeks” the release says.

Meanwhile, the team leading Toronto’s COVID-19 vaccination campaign says it is ready and willing to open immunization clinics across the city as soon as possible, though supply issues have made it hard to say exactly when that process will begin.

The update from the Immunization Task Force (ITF) was delivered during a Monday meeting of Toronto’s Board of Health.

The ITF will oversee the operation of multiple immunization clinics when the province enters the second phase of its mass campaign to inoculate Ontarians against COVID-19, which is tentatively set to begin on April 1.

“We understand that that date remains very fluid, and that is directly tied to the availability of vaccines,” ITF chair and Toronto Fire Chief Matthew Pegg told the board.

The second phase of the province’s vaccination plan will be the first time Ontario makes COVID-19 vaccines widely available to the general public. The first phase of the plan, which is now underway, prioritizes the residents of long-term care facilities and frontline health-care workers.

The city plans to open clinics at various locations during this phase, including large public facilities and city-operated properties like community centres.

The clinics will operate until such a time when the vaccine becomes available at places like family doctor’s offices and pharmacies, which is tentatively expected to begin around the end of summer.

City to slow down vaccinations after Pfizer shipment delay

The early stages of the city’s plans were complicated last week after an announcement from Pfizer that it would temporarily reduce its delivery of vaccines to Canada while it upgrades a manufacturing facility.

The delay means Toronto will experience a 20 to 80 per cent decrease in vaccine availability over the next four weeks as the city focuses its efforts on inoculating its highest-risk residents.

Toronto’s Medical Officer of Health, Dr. Eileen de Villa, said the city will focus on administering second doses of its available vaccines during the delay, rather than offering a first shot to others who are in need.

“While there are limits on vaccine supply, vaccines in those circumstances are being provided and administered where the greatest value can be provided,” she said.

The city’s Board of Health also discussed a request to the province to expand paid sick leave during the pandemic and any future public health emergencies.

“We are nearing a total of 75,000 cases since the pandemic started. Over 2,200 people have died from this virus — friends, family members, neighbours and loved ones,” Board of Health chair Joe Cressy wrote on Twitter.

He called the COVID-19 situation in the city “dire” and said new cases, hospitalizations, and outbreaks in the city are “moving in the wrong direction.”