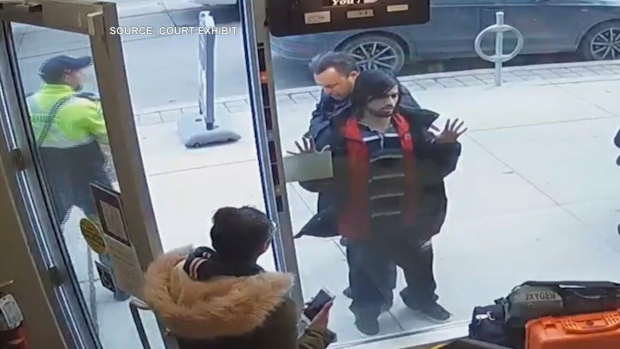 TORONTO — Lawyers are in closing arguments in a trial related to a brazen daylight shooting in the Beaches neighbourhood of Toronto two years ago, with prosecutors advancing the argument that the attack was motivated by disputes rooted in the victim’s social media presence and his music.

The Ontario Superior Court heard that the chaotic day began when one of the four suspects approached Brandon Ricketts in a jewelry store on Queen Street, asking if he was “Arez”, the man’s stage name in popular music videos he had put on Youtube.

“There’s a reasonable inference he knew who Arez was and there was some animus towards Arez,” said Crown Attorney Elizabeth Jackson. “This happened fast.”

The defence lawyers deny there was ever any plan, and Justice Peter Bawden appeared skeptical, saying, “If the animus of the shooter was related to Ricketts’ status as a rap star, or rap figure…whatever the shooter’s animus was, it could have come from a host of things.”

Exhibits entered into the trial and obtained by CTV News show what preceded the January 6, 2019 shooting, which jarred the Beaches neighbourhood at about 2:30 p.m., and its aftermath.

Surveillance video shows suspects jogging down alleys and lanes — one falls as he hops over a fence. One gun was found by a fence; another in a bucket of frozen water. A third was found in a Mercedes car.

John Okoro is charged with attempted murder, accused of firing the shots that wounded Brandon Ricketts and Nima Robati. The four people charged also include Ajmain Rahman, Dorshon Glasgow, and Rodrigues Sendia, all in their early 20s, together facing 13 counts in total.

And it’s the actions of Rahman, who video shows being arrested outside a store where Ricketts lay wounded, that provided prosecutors the possible motive.

Video shows the encounter in a jewelry store, which gives no hint of what is about to happen.

“Social media is a powerful tool to instigate and promote this negative vibe,” Martinez told CTV News in an interview.

But he said the better way — and the one which his program uses music to promote — is for artists to use their platforms to lift people up and heal.

“Breathe life. That’s what I would encourage these artists to do. Breathe life. You have the power to inspire millions. Do so,” he said.

The four have pleaded guilty to the charges. It’s going to be up to Superior Court Justice Peter Bawden to determine whether the four were involved in the shooting and what their possible motivations may have been.