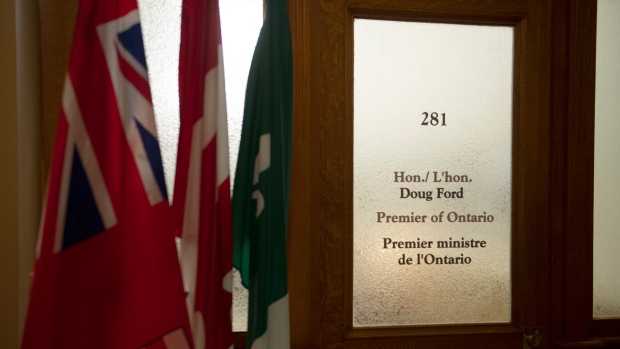 TORONTO — In his first news conference in nearly a week, Premier Doug Ford said the province moved “too fast” in announcing sweeping new measures aimed at curbing the third wave of COVID-19 in Ontario.

“I know that some of those measures, especially around enforcement, they went too far,” Ford said at the virtual news conference Thursday.

“Simply, we got it wrong. We made a mistake.”

Last Friday, the province announced new measures that granted police more powers which allowed officers to randomly stop people on the streets and in their vehicles to ask why they had left their homes during the stay-at-home order.

In response, police forces across the province said they would not enforce the measure.

The government walked back those powers in the face of growing criticism from public health experts and civil liberties advocates alike.

The decision to close playgrounds was also reversed by the government.

Ford made the emotional apology while also announcing that his government was actively working on a provincially-run paid sick leave benefit to curb the spread of infection in essential workplaces.

The premier said that Monday’s federal budget didn’t include the “important improvements” to the Canada Recovery and Sickness Benefit (CRSB) he was hoping for.

“That’s why we’re now working on our own solution to fill those gaps for everyone in Ontario,” Ford said. “We will come up with this program and again, it will be the best program in North America. We are working on solutions as we talk right now.”

Public health experts and members of the opposition — as well as the province’s own science advisory table — have been calling for paid sick days for essential workers as the province grapples with the third wave of the COVID-19 pandemic.

Ford has long rebuffed those calls, pointing to the CRSB as a viable option and warned against “double dipping.” Critics of the federal program have maintained that it doesn’t go far enough and leaves workers waiting for retroactive payments if they miss 50 per cent of their work week.

Ford is currently isolating after a member of his staff tested positive for COVID-19 on Tuesday. A spokesperson for the premier has said that he has since tested negative.