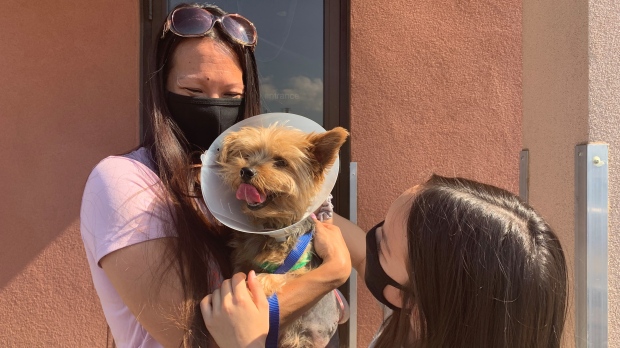 TORONTO — A six-year-old Yorkie seriously injured in a coyote attack in Scarborough earlier this week has been released from the hospital.

Dorothy Kwan and her 10-year-old daughter Lily picked up their “very brave dog” Macy Friday afternoon to bring her home, where she will continue her recovery.

“I’m overwhelmed. We just can’t wait to get her home. It’s been several days, and it’s been a long wait,” Kwan said.

Macy is credited with protecting Lily from a coyote that chased them while they were out for a walk in a park near St. Clair and Warden avenues on Tuesday morning.

A neighbour’s security camera caught the moment when the coyote attacked and bit Macy as Lily screamed for help.

One neighbour let Lily into their home while another chased the coyote away.

“I love what she did for me,” Lily said. “Because the small dog tried to protect me against this huge coyote, trying to defend herself.”

Macy, who the family rescued five years ago, suffered puncture wounds to her spine and hind leg and needed surgery. After spending several days at the clinic, Macy, wearing a cone around her neck, was finally reunited with her owners.

“She’s got a bunch of staples in her. They’re holding together all the wounds that she suffered. And she’s got the drains. It’s gonna be pretty difficult managing these at home, but I’m gonna try my best,” said Kwan, who was on her way to work when the attack happened.

The mother and daughter expressed their gratitude for all those who donated money to help pay for Macy’s hospital bills.

“I just want to say thank you from the bottom of my heart. It was very unexpected,” Kwan said. “It’s helping us greatly with our finances and thank you so much.”

Kwan said she is not surprised by Macy’s actions as the dog has always been protective of the family.

“So, for her to put her life on the line for Lily, it just goes to show you how loyal she is,” she said.

Kwan noted that her daughter is still terrified to go for a walk since the incident occurred.

Lily said she will just walk around their property for now, equipped with a bat or a pepper spray.

“We’re just going to be a little more careful. I’ve got my little coyote spray on me. And, we have Macy to protect us.”