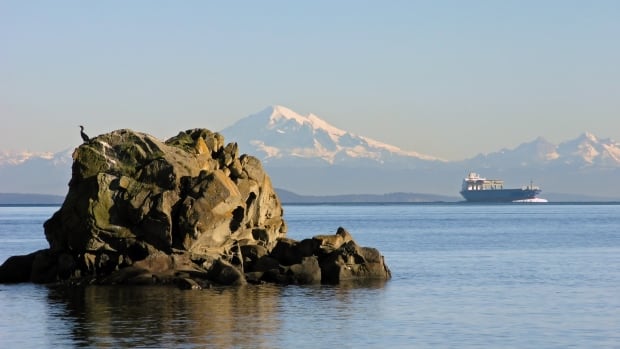 Residents of the southern Gulf Islands are extremely worried after a windstorm pushed two large commercial carriers next to each other in Plumper Sound Monday morning, causing their anchors to entangle.

Transport Canada said in a statement that one of the ships was “reported to have dragged anchor and struck the [other], as a result of which the vessels’ anchors became tangled.”

It said no injuries have been reported from both vessels.

Peter Lister, Seaspan Marine’s vice president of commercial services, said two of the association’s tugboats were called by the Pacific Pilotage Authority at around 5 a.m. to help maneuver the ships in order to untangle their anchors.

The ships have since been disentangled and are now safely anchored while Transport Canada conducts follow-up inspections. The statement said no pollution has occurred.

Pollution or not, South Pender Island’s Bruce McConchie said his reaction was “horror” when he saw the two ships so close to each other.

“We’ve been opposing these anchorages for years,” he said, noting the potential for a “catastrophic” oil spill, should the ships have run ashore. “The response time would be way, way too long,” given the sound’s proximity to responders, he said.

Peter Luckham, chair of the Islands Trust, a federation of local governments aimed at protecting the Gulf Islands, said he was shocked to hear that the vessels, around 200 metres in length, had become entangled with each other.

“It indicates the fragility of anchoring [in Plumper Sound],” he said. “The winds come up through the channel … and push the vessels around significantly.

Luckham said in the last 10 years, the number and frequency of anchorages in this “recreational, residential” area has increased. He said the Islands Trust is currently in the midst of rebuilding its relationship with the federal government post-election, after seeing little accomplished under the previous government’s Ocean Protections Plan.

“There’s a continuing necessity for [commercial ship] impact studies,” Luckham added. “People living adjacent to the channel don’t sleep at night because of the noise, the lights, and concerns that at the next storm, some great impact may happen in the waterway.”

McConchie said he learned through a recent Freedom of Information request that, between 2009 and 2018, there have been 20 instances in the southern Gulf Islands where vessels have requested to be repositioned by the Pacific Pilotage Authority, after dragging anchor.

Of those 20, 14 have occurred in Plumper Sound.