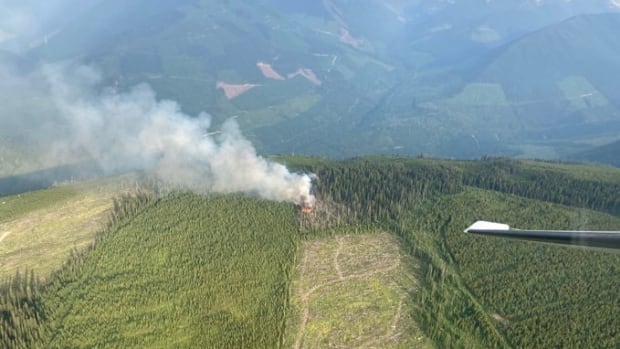 Thunderstorms moving through B.C.’s Southern Interior over the weekend are suspected to have caused dozens of wildfires.

In the past two days, the B.C. Wildfire Service has recorded 46 new wildfires, bringing the total number of active fires in the province to 49.

The Solco Creek wildfire, 27 kilometres northeast of Oliver, is the largest in the province and has grown to approximately 13.8 hectares in size. It is classified as out of control.

With thunderstorm cells currently passing through the Southeast Fire Centre, the <a href=”https://twitter.com/hashtag/BCWildfire?src=hash&amp;ref_src=twsrc%5Etfw”>#BCWildfire</a> Service is responding to 13 suspected lightning-caused fires in the Arrow, Boundary, Columbia, Cranbrook, and Invermere zones.

Later in the afternoon Saturday, thunderstorms moved southeast where 13 new wildfires are suspected to have been ignited by lightning.

The largest fire in the Southeast Fire Centre is the Burton Creek wildfire at 0.3 hectares in size, which is located 35 kilometres south of Nakusp. Ground, airtanker and rappel crews are working to suppress it.

The Solco Creek wildfire (K50732), located approximately 27 kilometres northeast of Oliver, is roughly 13.8 Ha in size and is classified as Out of Control. There are 41 personnel, 3 helicopters and 1 piece of heavy equipment responding. No structures are threatened at this time. <a href=”https://t.co/fKCk8JboXo”>pic.twitter.com/fKCk8JboXo</a>

“They were storms that we had forecasted, and so in anticipation of the possibility for increased fire activity … we brought more crews on line on standby, and more resources like the air tankers and helicopter support,” Wright said.

Wright is asking the public for their continued support in using campfires responsibly and following the rules.

There have now been 311 wildfires recorded across the province this year, with 87 occurring in the past week.