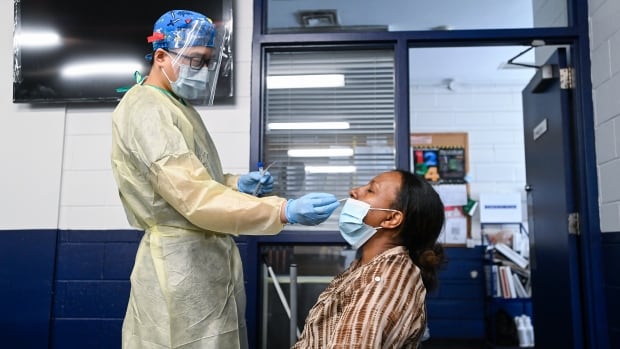 There are 106 new COVID-19 cases in Manitoba on Saturday and three more people have died from the illness, the province says in a news release.

The largest proportion of those new cases are in the Winnipeg health region, which has 49.

Manitoba’s latest COVID-19 deaths are all linked to the more contagious B.1.1.7 coronavirus variant, also known as the alpha variant, first seen in the U.K., the release said.

The update comes on the first day of loosened restrictions in Manitoba after the province met its first set of vaccination targets. As of Saturday, businesses including salons and gyms are allowed to reopen and gathering sizes have been expanded in the province.

Manitoba has also now moved from the critical red level of its pandemic response system — the highest level of the colour-coded system — to the restricted orange level.

Manitoba’s five-day test positivity rate rose slightly to 6.1 per cent, up from 5.9 on Friday. Winnipeg’s also increased, up to 6.7 per cent from 6.5.

There are now 187 Manitobans hospitalized after getting COVID-19, down by 10 since Friday. That includes 65 in intensive care, a decrease of one.

Of those patients, 12 are still in critical care units outside the province, with 11 in Ontario and one in Alberta, the release said. Since Manitoba first started sending some COVID-19 ICU patients out of province to free up space in its strained hospitals, 35 have been brought back, the release said.

The province has also connected 99 more cases of COVID-19 to coronavirus variants, according to its online variant dashboard. That includes 36 more cases linked to the alpha variant and 25 infections newly linked to the B.1.617.2 variant first seen in India — also known as the delta variant. Doctors in Manitoba have been sounding the alarm about that highly contagious coronavirus strain in recent weeks.

There are also three more cases of the B.1.351 beta variant linked to South Africa and one more case of the P.1 gamma variant associated with Brazil. Another 34 newly detected variant cases have yet to be linked to a specific strain, the dashboard says.

That means that on top of the few people who were still attending, participants whose mental health has been affected by the pandemic can also now attend.

Those services had been suspended with few exceptions since mid-May.

They can now have up to two fully immunized visitors inside the facility, the release said.

Participants, along with their families and support networks, are encouraged to contact their community service worker if they have questions, the release said.

Manitoba has now identified 55,879 COVID-19 cases since the beginning of the pandemic, including 53,227 considered recovered and 1,514 still deemed active, the release said.