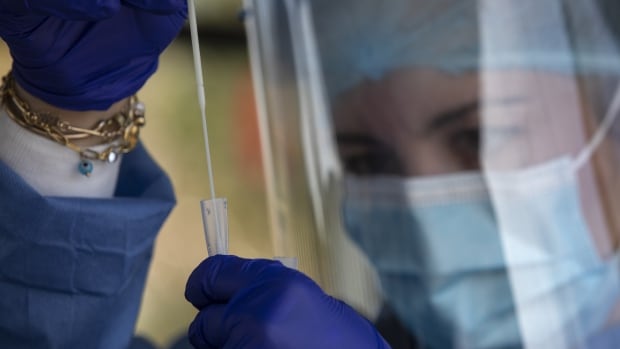 There are 151 new COVID-19 cases in Manitoba on Sunday and five more people have died from the illness, the province says.

There are nine more people hospitalized with the illness, a news release says, marking a jump to 322 hospitalizations. Thirty-six of those people are in intensive care, a drop of one from Saturday.

The latest deaths, which bring Manitoba’s total to 738, are all women from the Winnipeg health region, the release says.

Four are linked to outbreaks: one in her 70s at the Southeast Personal Care Home; two in their 80s (at the Convalescent Home of Winnipeg and Deer Lodge Centre, Lodge 4 West) and one in her 90s linked to Seven Oaks General Hospital 4U4-7 unit.

Another woman in her 80s also died, the release says.

Manitoba’s five-day test positivity rate is up to 10 per cent, the release says. In Winnipeg, the rate is down to 9.2 per cent.

A previously declared outbreak at the Brightwater Senior Living of Tuxedo Assisted Living Facility is now over, the release says.

Places where there were possible public COVID-19 exposures are listed by region on the province’s website.

There have now been 26,317 COVID-19 cases detected in Manitoba, including 20,850 considered recovered and 4,792 still deemed active, though provincial officials have said that number is inflated because of a data entry backlog.