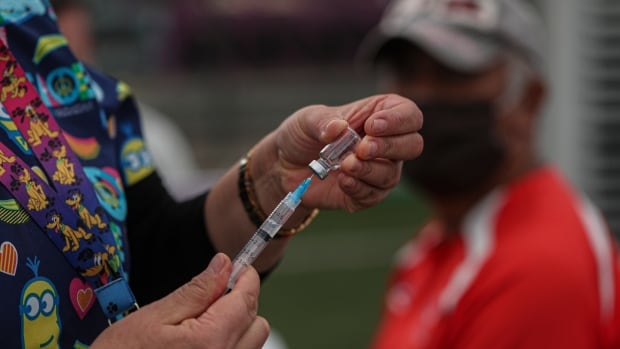 The new supersite is expected to open at the WSF Soccer North facility, at 770 Leila Ave. in Garden City, on May 7, they said. The site will have a maximum daily capacity of 4,154 doses.

The new site will be in addition to the supersite at the Winnipeg convention centre.

More details about the province’s vaccine rollout will be announced during a news conference with task force medical lead Dr. Joss Reimer and co-lead Johanu Botha at 12:30 p.m. CT.

As of April 9, more than 259,840 doses of the coronavirus vaccines have been administered to Manitobans. That’s a jump of more than 25,000 doses from the previous day, after a data backlog was cleared, task force members said during a technical briefing with reporters Friday morning.

Also as of Friday, 92,000 doses have been allocated to Manitoba’s 63 First Nations and roughly 300 medical clinics and pharmacies. Another 55,217 doses have been booked, with appointments over the next 10 days.

Although the province could administer those booked doses faster than over 10 days, that speed would come at a cost, Botha said during a technical briefing with reporters Friday morning.

“If we took all of that and just pumped it though our supersites, we could be done in less than a week,” he said.

A significant portion of those doses are going through “slower pipes,” such as First Nations, mobile immunization teams and clinics, Botha said.

“If we wanted to race through 55,000 and just get doses in arms as quickly as possible, we could do that. The trade-off would be that Manitobans in remote, rural and vulnerable contexts, like congregate living facilities, would not be prioritized.”

On Wednesday, the province announced everyone 62 and older and First Nations people 42 and older can now get vaccination appointments.

The province also updated its guidance to allow people 65 and older to get the AstraZeneca-Oxford shot. Previously, only people age 55 to 64 with certain high-risk health conditions were eligible.