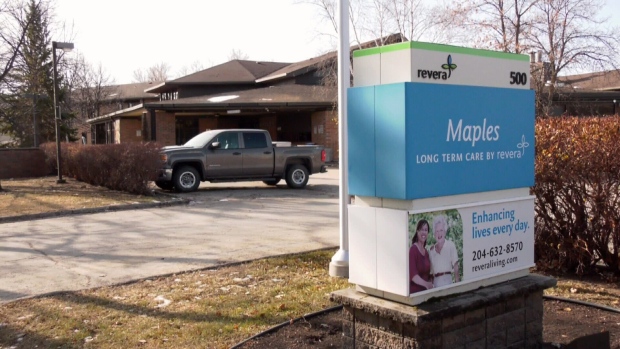 WINNIPEG — Deaths in long-term care homes account for around half of all COVID-19 fatalities in Manitoba.

It’s a stark reminder of the devastating toll the coronavirus pandemic has taken on vulnerable and elderly people.

Looking back over the past year, advocates, experts and families point to a system they feel was unprepared for a threat hidden in plain sight—one that some relatives say wasn’t taken seriously until it was too late.

“We’re all going to end up in places like this at one point or another,” said Alvin Cadonic, who has an aunt and an uncle living at Maples Personal Care Home. “Really, we’re just fighting for own futures as well as the futures of our relatives that can’t advocate on their own.”

The night of Nov. 6, described in a social media post by an anonymous paramedic as a “nightmare,” still stands out in Cadonic’s mind.

It happened under a week after staffing levels dropped to a critical low leading to inadequate care. That night the Winnipeg Fire Paramedic Service responded to 18 calls to 911 from Maples in a 24-hour span.

“After that day it just shook us to our core because you had this paramedic whistleblower talking about this disastrous night,” said Cadonic.

Multiple residents were taken to hospital. Others received IV fluids and oxygen therapy on site.

Eight residents died over a period of 48 hours.

“I don’t think anyone realized that COVID-19 was going to turn a personal care home into a hospital overnight,” said Jan Legeros, executive director of the Long Term & Continuing Care Association of Manitoba. The group’s members include seniors’ residences throughout the province including care homes owned by Revera, the company which runs Maples Personal Care Home.

In all, 56 residents of Maples care home died after contracting COVID-19 during a months-long outbreak. With 231 total cases, it was both the deadliest and largest in Manitoba’s long term care system.

A review of the outbreak commissioned by the province identified gaps in pandemic planning at multiple levels. It found a failure to identify the precipitous and significant loss of staff members, who were forced to stay home after getting infected themselves or to isolate.

Dr. Samir Sinha, a Toronto-based director of geriatrics for Sinai Health and University Health Network sees what happened at Maples as emblematic of what took place in some other care homes in Winnipeg and across Manitoba during the second wave of the pandemic.

“I think people realized how bad this could get so quickly and I think now there’s been a lot of lessons unfortunately learned with a number of Manitobans unfortunately having passed away,” said Sinha. “We need to anticipate that care can collapse very quickly when a virus spreads into a home.”

Earlier outbreaks like the one at Bethesda Place care home in Steinbach, Man. starting in August also claimed lives, but Manitoba didn’t experience the number of cases or same level of morbidity as other provinces did during the first wave.

“I wonder if that may have given people a false sense of security,” said Sinha.

A recent National Institute of Ageing (NIA) report co-authored by Sinha highlighted how the second wave was far more deadly.

Six care homes in Manitoba were affected between March and August 2020 compared to 80 between September 2020 and March of this year.

Six resident cases occurred in the first wave compared to more than 1,600 in the second.

Eight long term care staff members got COVID-19 in the first wave, 669 contracted the virus in the second wave.

Three Manitoba care home residents died in the first wave, while the NIA documented 465 deaths in long term care in Manitoba in the second wave. However, numbers provided by the province show there’s been a total of 445 COVID-19 deaths in long term care between Mar. 1, 2020, and Mar. 2, 2021. As of Mar. 11, a total of 911 Manitobans had died after contracting the virus.

“Really the sad part was we saw hundreds of people die during the second wave in Manitoba,” said Sinha. “I think it really helped to underscore how there probably was more preparation that was needed to make sure that we had adequate staffing in place and maybe even more enhanced infection and control measures.”

Quebec, which hired more staff and implemented stricter infection control measures after more than 4600 deaths in the first wave, had 1500 fewer deaths in the second wave, according to the NIA while most other provinces experienced increases.

Michelle Porter, director of the Centre on Aging at the University of Manitoba, said the second wave showed more clinical expertise is needed on site when an outbreak occurs and that care in general needs to be improved.

“We also didn’t have plans in place for how to care for sick residents,” Porter said of Manitoba’s response.

Under normal circumstances provincial guidelines require care homes to provide 3.6 hours of care for each resident per day but Porter said even that standard falls short of what’s needed.

“Research has demonstrated in jurisdictions like Manitoba, 3.6, even in non-pandemic times, is not enough so it’s more like over four hours,” said Porter.

“Now it is in the whole public’s attention,” said Porter. “Hopefully, that will really push people to want to make change.”

Heather Stefanson, appointed Manitoba’s health minister in January, acknowledged there were challenges but feels the province made the best decisions with the information it had at the time.

“We’ve seen Dr. (Brent) Roussin mention this where, maybe we didn’t really get a first wave,” said Stefanson. “Our first and second wave came at the same time.

“I think we took very swift action from the beginning. Obviously, what happened in the fall is a tragedy and I know that other provinces were having difficulty through that second wave as well but we were really getting the first and second wave at the same time.”

A total of 17 recommendations have been made following the Maples review. Some work is already in progress while other recommendations, including developing and putting in place a robust workforce, will take longer.

“I think what is important is that we learn from what has happened,” said Stefanson.

Eddie Calisto-Tavares, whose 88-year-old dad Manuel Calisto died in November after contracting COVID-19 while living at Maples, has formed a volunteer task force to make sure Manitoba follows through on the recommendations.

“As a result of my father dying I don’t want his death and the deaths of 56 other people to go in vain,” said Calisto-Tavares. “I’m going to keep at it until I feel not only these 17 recommendations are implemented but there are other things I want as a result.”

Legeros feels confident the recommendations coming out of the Maples report will help.

“There are recommendations that address the staffing, the sustainable and reliable operating funding, the infrastructure issues,” said Legeros. “We’ve learned the hard way through COVID that shared accommodations are putting our residents at higher risk.”

Hope is on the horizon. Most personal care home residents have been fully vaccinated but the emergence of variants of concern in Manitoba has stoked fears of a third wave.

Cadonic said trust from families has been eroded and that it’s once again up to the government to make sure people are protected.

“What’s going to happen if a third wave hits?” said Cadonic. “Are they prepared now?”