When the Vancouver Canucks discovered that screened point shots were getting results, they kept doing it.

By the time the Winnipeg Jets figured things out, it was too late.

Vancouver scored three first-period goals in similar fashion Monday night in a 4-0 victory at Bell MTS Place. Nate Schmidt, J.T. Miller and Nils Hoglander staked the Canucks to an early lead and Thatcher Demko did the rest, making 27 saves for his first shutout of the season.

All three goals came from shots inside the blue line that were tipped, redirected or knuckled past Winnipeg goaltender Connor Hellebuyck.

“When you know you can get yourself into those areas, that’s where the goals are scored,” said Schmidt. “I was proud of our guys for how we got to those areas tonight.”

Elias Pettersson sealed it with an empty-net goal as the Canucks (9-14-2) won for the first time in five games and ended Winnipeg’s four-game winning streak.

After being held to one shot on goal over the first eight-plus minutes, Schmidt sent a fluttering shot from the high slot past a screened Hellebuyck at 8:28. 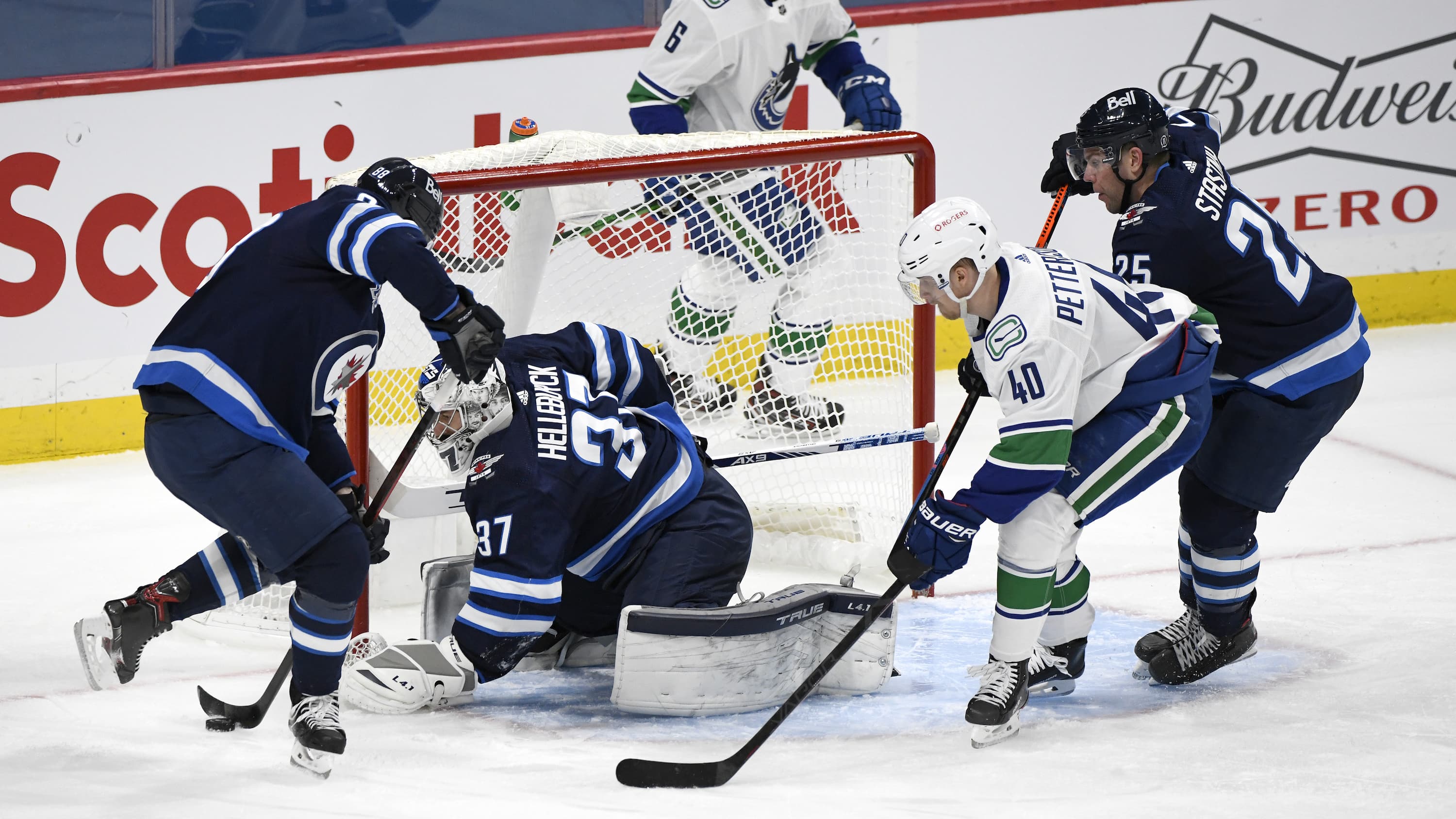 Vancouver’s second power-play unit used the same formula to extend the lead at 14:50. Tyler Myers sent a wrist shot from inside the blue line that Hoglander tipped to make it 3-0.

Demko, meanwhile, was steady when needed in the Vancouver net. He gave up few rebounds and delivered when the Jets pressed late in the game.

“I think over the last handful of games, our defensive side of things is coming along really nicely,” Demko said. “Tonight was kind of the pinnacle of building up to this point.”

After a sluggish first period, the Jets (13-7-1) seemed more inspired in the second period but had difficulty delivering any sustained pressure.

Mark Scheifele had two decent chances midway through the third period and Blake Wheeler was denied after a crafty deflection on a Sami Niku shot.

The Jets pulled Hellebuyck with over five minutes left in regulation. Winnipeg hit the post on a deflected shot before Pettersson put the game away at 16:26.

The teams will face off again Tuesday night in the finale of the Jets’ four-game homestand.

“You’ve got to have a short memory in this league,” Scheifele said. “You can’t dwell on things too long. You’ve got to get a good sleep tonight and get ready for tomorrow.”

After Tuesday’s game, the Jets will take to the road for 12 of their next 14 games.

The Canucks will return home to kick off a five-game homestand Thursday against the Toronto Maple Leafs at Rogers Arena.