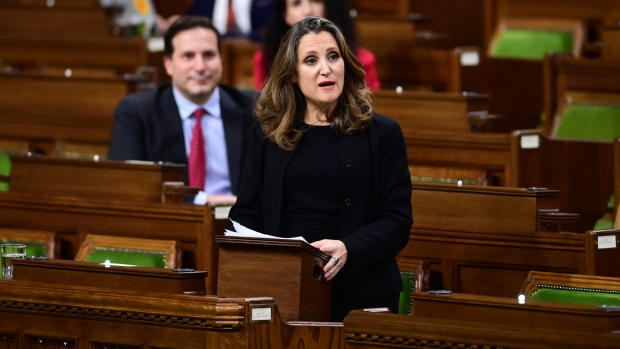 OTTAWA — The federal government is unveiling a new round of financial supports to respond to the second wave of the COVID-19 pandemic in Canada, as the latest projections show the national deficit is projected to hit a new high: at least $381.6 billion this fiscal year.

The deficit is growing for several reasons: ongoing pandemic supports, $25.1 billion in newly-announced programs aimed at getting badly-hit businesses through the next few months, as well as the early allocations being made to help rebuild the economy once the urgent health crisis passes. The Liberals are also making moves towards boosting transfer payments to the provinces.

That federal deficit projection is considered Canada’s best-case scenario, and is up from the $343.2 billion forecast in July. However, should the pandemic situation continue to worsen and the country experiences extended restrictions, the deficit could hit $388.8 billion in 2020-21, or balloon to $398.7 billion if restrictions are escalated.

Titled “Supporting Canadians and Fighting COVID-19,” the 237-page fiscal update offers the country a revised look at the state of the federal finances and the impact the ongoing COVID-19 recession has had on Canada’s economic outlook, but offers no estimate of when, if ever, the government will balance its books.

“This is the most severe challenge our country has faced since the Second World War. It is our most severe economic shock since the Great Depression, and our most severe public health crisis since the Spanish Flu a century ago. Canadians should know that their federal government will be there to help them get through it, come what may,” Freeland said in her House address.

Speaking to reporters during an embargoed news conference as part of a virtual “lockup” on Monday afternoon, Freeland said that given the country is still in the midst of a second wave, the government’s priority remains fighting the virus and protecting Canadians’ health and safety.

She also said the Liberals’ unprecedented spending to date has helped stabilize the economy, and that’s why the government plans to continue that approach.

“Canada’s spending as outlined today is prudent, it is thoughtful, it is careful. And what we understand is that the job we have to do right now is to be sure that our economy is not scarred, to be sure that our economy is not wounded, so that we can come out of this crisis roaring back,” Freeland said. “We believe that the best way for Canada to honour our credit obligations, is to have a strong and growing economy, that’s what this plan is all about.”

The fiscal update shows that since March, the federal government has spent more than $322 billion— up from July’s total of $231 billion, on direct aid measures to help fight COVID-19 and protect Canadians over the course of the pandemic so far. This includes more than $52 billion in support for co-ordinated federal, provincial and territorial measures.

This has included a reworked Employment Insurance program, and new sick leave and caregiver leave programs for those who have to take time off work due to COVID-19.

Monday’s economic update includes a series of new measures building on the federal government’s ongoing response which has included a suite of emergency response aid programs, the support for local community organizations on the front lines, and the $19.9-billion safe restart package sent to provinces.

Responding to premiers’ calls for a boost to the annual health transfers, the Liberals are proposing to nearly triple the maximum payment to $170 per resident, up from $60, as part of a review of the program’s terms, last reworked in 1995. Legislation and regulatory amendments are coming to make these changes, which the federal government says will “make the program more generous when provinces need help the most.”

The government intends to introduce legislative and regulatory amendments to implement these changes.

In an effort to respond to the still surging pandemic, the federal government has announced plans to spend more on COVID-19 testing, vaccines, self-isolation support, and procuring personal protective equipment, reduce the cost of face shields and face masks for Canadians by removing sales taxes, and improve ventilation in public buildings.

Canadians working from home will also be getting a boost: The federal government is allowing people with “modest” expenses to claim up to $400, based on their time spent working from their dining room table, or spare room. The economic update states that Canadians can make the claim on their taxes without needing to report itemized expenses and the Canada Revenue Agency likely won’t prod for confirmation from employers.

From an economic support standpoint, the government is also announcing plans to increase the maximum rate of the Emergency Wage Subsidy back up to 75 per cent beginning in late December at a cost of $14.7 billion and extending the current rate of support offered through Canada Emergency Rent Subsidy and additional lockdown top-up offered to businesses forced to close, until March at least, at a cost of $2.1 billion.

As well, the federal Liberals will be establishing a $1-billion “Safe Long-Term Care Fund” to help provinces and territories better protect Canadian seniors as part of plans to establish a national standard of care. This program will be contingent on a detailed spending plan, and allocated on an equal per capita basis, conditional on provinces and territories demonstrating that investments have been made. The money will help improve infection prevention and control in long-term care homes and hire additional staff, as examples.

To help Canada’s hardest-hit industries such as the tourism, hospitality, arts, entertainment, and regional air sectors, the government is creating a new “Highly Affected Sectors Credit Availability Program.” This new stream will allow those who need it to access 100-per-cent government-backed loans, with better terms for those who have lost revenue due to people staying home to limit the virus’ spread.

These new loans are being offered for as much as $1 million, for up to ten years, with more details promised soon.

And, the Liberals are moving ahead with imposing the Goods and Services Tax/Harmonized Sales Tax (GST/HST) on multinational digital giants such as Netflix and Amazon, “so they pay their fair share.”

Referencing the uptick in e-commerce Canadians are conducting and efforts to level the playing field with local brick-and-mortar retailers, the federal government is looking to pick up billions in new revenues over the next five years by proposing a number of changes to ensure that the GST/HST applies to all goods and services purchased in Canada from foreign companies. These changes will be effective July 1, 2021.

Based on the varying federal projections on the deficit—depending on the severity of the pandemic over the next few months—the federal government has unveiled a new economic stimulus plan it intends to roll out over the next three years to boost Canada’s recovery.

Depending on the state of the country’s finances at the time, the federal government says it will spend roughly three to four per cent of the GDP— $70 to $100 billion between 2021 and 2024 — to “jumpstart” the economic rebound.

The economic update includes planned spending as part of this program billed as a “down payment” on the plan — largely initiatives focused on green recovery such as new money for home retrofits and tree planting and addressing systemic barriers that COVID-19 has exposed, such as homelessness and racism.

“We will spend the winter working with Canadians, leading into Budget 2021, to plan and prepare our investments for when the virus is under control. At that time, we will be ready to shift into high gear. That is why we are announcing the scope of the plan now,” reads the economic update.

One of the biggest measures foreshadowed as part of this long-term growth plan is the creation of a Canada-wide “Early Learning and Child Care System.”

Billed as one of several endeavours meant to respond to the “she-cession”—the economic effects women are disproportionately experiencing amid the pandemic—the government is announcing the intent to move forward with this child care plan in next year’s budget.

Initially, the Liberals are providing $20 million over five years, starting in 2021-22, to bring together governments, experts and stakeholders to design this new national plan.

“I say this both as a working mother, and as a finance minister: Canada will not be truly competitive until all Canadian women have access to the affordable child care we need to support our participation in our country’s workforce,” Freeland said Monday.

As well, the Liberals are promising to provide additional support of up to $1,200 a year in 2021 for each child under the age of six, through the Canada Child Benefit program, and to eliminate federal interest on Canada Student Loans and Canada Apprentice Loans for 2021-22.

The deficit projection released Monday in the federal government’s fall economic statement is just one of a series of newly-updated figures that show the impact the pandemic has had on the Canadian economy.

The federal government continues to state that Canada’s economic situation would have been much worse without the early introduction of massive aid measures.

That being said, the government says the federal debt will exceed $1.4 trillion by March 2021, up from the $1.2 trillion projected in July’s financial report.

As of the latest update from Statistics Canada on the country’s unemployment rate, nearly one quarter of those who are currently out of work have been for at least six months. In total, 1.8 million Canadians were out of a job in October, and the overall unemployment rate is sitting at 8.9 per cent.

Monday’s document shows that nearly 80 per cent of the jobs lost at the start of this crisis have been recouped, but unemployment is not expected to return to pre-pandemic levels until sometime in the summer of 2022.

Freeland restated a position held by her predecessor, Bill Morneau: that Canada’s debt-to-GDP-ratio remains the lowest among the G7, and so the debt will be affordable to manage for the many years it’ll take to get closer to balance. The finance minister said that despite the massive deficit, Canada’s current debt-servicing costs relative to the size of Canada’s economy are at a 100-year low.

The federal government now projects its debt-to-GDP ratio will be 50.7 per cent in 2020-21, up from the 49.1 per cent forecast in the July snapshot.

While the update offers no specific fiscal anchor, the government has introduced a new approach: “fiscal guardrails,” with a pledge to have more details on how they’ll work in the months ahead.

Explained as a series of data-based guides that inform the government’s financial approach, the government says it will monitor certain economic indicators like the unemployment rate, hours worked, and other labour market indicators as metrics to decide whether to ease up or dole out more federal dollars.

Monday’s fiscal update is expected to be followed by a full federal budget sometime in 2021, after the 2020 budget scheduled for March 30 was cancelled due to the COVID-19 pandemic.

All of the proposed new measures will be voted on by MPs in the coming weeks. The measures are set to be considered a confidence matter and if the opposition doesn’t support them, the Liberal minority government could fall.