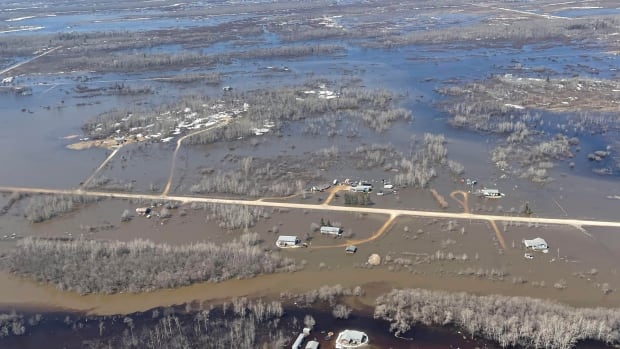 Flood forecasters in Manitoba say they’re keeping a close eye on a series of precipitation systems that could bring between 40 and 60 millimetres of rain to much of the province over the next five to seven days.

There’s also a high chance some areas will get more than 60 millimetres of rain, the province said in a flood bulletin on Saturday afternoon.

Manitoba’s hydrologic forecast centre will update its water level forecasts to determine the effect all the rain will have on areas already experiencing flooding, the bulletin said.

Right now, forecasts suggest southern and central Manitoba will get strong south winds later Saturday and overnight with gusts up to 80 km/h.

That could cause water levels in flooded areas of the Red River Valley south of Winnipeg — from Letellier to Rosenort — to rise by up to six inches.

Waves could also add to the temporary rise in water levels, which could result in water temporarily covering roads, the flood bulletin said.

But flooding continues in the Interlake, Red River Valley and many other parts of central and southern Manitoba, the bulletin said.

However, that flooding is now becoming more concentrated around rivers, streams and drains that are above capacity as water moves through the system.

People who live in these areas should keep an eye on local conditions and take any necessary flood mitigation actions, the province says.

The floodway, along with the Portage Diversion, are both still operating to lower water levels in Winnipeg.

Water levels are still rising in the Red River Valley, with peak levels forecast to be similar to 2009 levels at Emerson, and slightly lower — between 2011 and 2009 levels — from Letellier to the Red River Floodway inlet.

The 2009 Red River flood was the third-worst since Manitoba was founded. The peak flow for the river just south of Winnipeg that spring was 97,000 cubic feet per second.

Flow in the floodway channel was near 40,000 cubic feet per second Saturday morning, the bulletin said, while flows upstream of the floodway inlet were at approximately 79,000.

But water levels are expected to stay high for a while in many parts of southern and central Manitoba, the bulletin said.

Highway 75 — the main route from Winnipeg to the U.S. — remains closed both north and south of the town of Morris, with detours in place. Details about highway closures across Manitoba are available on the province’s website.

Several warnings and high water advisories are in effect: