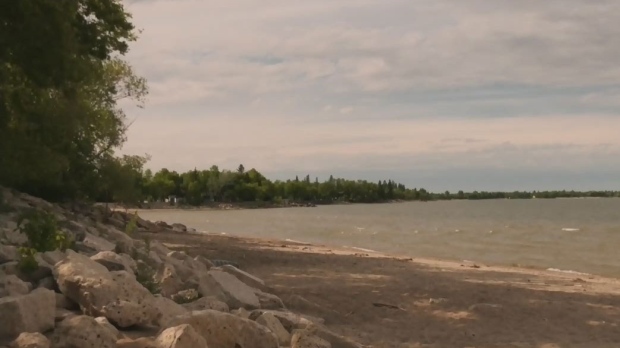 WINNIPEG — Three people were rescued on Lake Winnipeg Sunday afternoon after their inflatable got caught in the wind.

Megan Berntt and her family were enjoying the beach beside their Matlock, Man., cottage when they noticed something on the horizon.

“Some kind of watercraft that appeared to be so far out on the lake that I could barely see it,” recalled Berntt.

She and her neighbours ran to grab binoculars, saw it was a dinghy stuck in the middle of the lake and called 911.

The Matlock Fire Department, along with two other nearby emergency departments, launched zodiacs into the water.

“The waves when our people went out were probably a foot and a half, so trying to paddle against that is just not a good thing,” said David Creasy, deputy chief of the Matlock Fire Department.

Rescuers managed to reach the dinghy, which had drifted even further, and save the three people aboard.

According to Creasy, the people in the dinghy were alright except for being scared and fatigued.

Creasy said these types of rescues tend to involve people who don’t know the area, as is the case in this incident.

“I would say nine times out of ten, they are people that are not from around here. And it is people who are not equipped for the water and weather they are in,” Creasy said.

Lifesaving Society Manitoba said conditions on the lake change fast, which is why it doesn’t recommend using dinghies like the one which drifted.

“We recommend in most cases, don’t take an inflatable out to any of the big lakes in Manitoba because with a bit of wind, you can end up going far away from shore really fast,” said Christopher Love, water smart coordinator at Lifesaving Society Manitoba.

Love said people using dinghies should tie them to shore and always wear a life vest.

Berntt said she feels even safer letting her kids swim in the lake knowing the first responders’ response.

“It was remarkable to see the rescue efforts, especially since we are a small village. It’s not like we are five minutes from the city. The response and the rescuers were true heroes,” Berntt said.